Al Sharq Youth Forum 'in favor of the Future'

The forth annual al-Sharq Youth Forum kicked-off in Istanbul. This year, it focused on future trends in politics and economics, business, media, science and technology, and arts and culture. 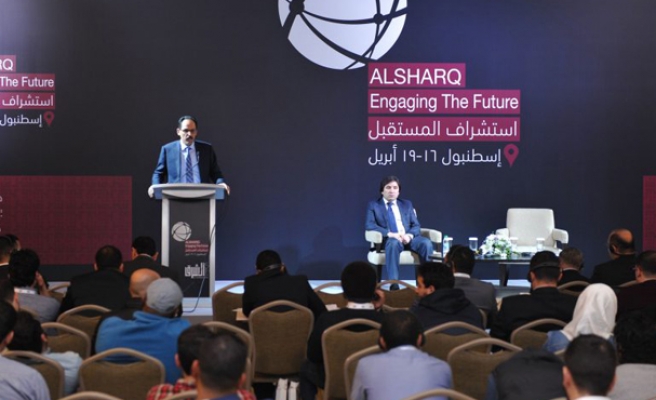 As the world moves toward unprecedented technological advancement, a new discourse is arising with the role of technology encroaching into the culture of media, setting off trends that will soon set the standard in newsrooms around the world. As a key discussion at the fourth annual Al-Sharq Youth Forum, which was hosted in Istanbul, Turkey, the role of technology in the world of media is set forth as a reality that has impacted the geo-political landscape of the world and has called to the fore the role and responsibility of media houses and journalists who control the narrative of global events.

“The Sharq Youth Forum is an independent international network whose mission is to undertake impartial research and to develop long-term strategies to ensure the political development, social justice and economic prosperity of the people of the east and globally.”

Opening the discussion, Khanfar spoke to the need to give space to the youth. Where we see historically the elderly were responsible for formulating values of society, he now urged leaders to provide youth with a space to have ideas and opinions.

“The elderly do not belong to this generation of technology and information sharing,” he stated.

Conversely, he notes that the elderly can provide the youth with values, adding that the youth need values more than they need ideology

Khanfar shared the same sentiment that many others have tabled, where individuals praise the Islamic world as having achieved enlightenment thousands of years ago.He, however, says that the Muslim world has left the state of enlightenment and “went back to darkness.”

Therefore, encouraging the youth to develop new agendas and not to imitate the elderly in the manner in which they engage on issues of concern.

“The future is liquid, so keep enough flexibility to build the future,” Khanfar elaborated.

Addressing some 700 delegates at the Hilton Istanbul Bosporus Conference Centre, former managing director of Al Jazeera English, Al Annesty spoke on the future of media. He explains that good journalism is being hijacked by those who have their own agenda – “who massage the truth in pursuit of political gain.”

He adds that readers, the watchers and listeners are none the wiser, therefore, asserting the fact that “people” are a central part of the solution to false and misguiding news.

“The key is to let people know if they are a victim of untruth.”

Since most journalists exist to represent the people they cover and the people they inform, Annesty says fake news narratives must not result in “defensive” reactions from media houses and journalists. Instead, he encourages journalists to use fake news as a means to improve reporting standards and, therefore, requires media to be impartial.

While all presentations appealed to the audience, the presentation that garnered the most intrigue is that of Vit Jedlicka, the founder and the President of Liberland, a country founded by Jedlicka on April 13, 2015.

The country, whose borders were defined without disturbing other countries, including Croatia, a neighbouring state. But, despite the fact that Croatia does not claim this territory, Jedlicka says that it has trouble settling the establishment of Liberland.

Speaking on the future of ‘decentralized’, Jedlicka spoke to the fact that Liberland will not need a court, instead relying on centralized technology rendering court systems and nation states obsolete. Therefore, decentralizing systems of governance and the banking system.

“So you can start your company and you don’t need any state to register you.”

While the presentation fascinated the biggest cynics in the room, the idealistic framework of the country called to the fore the reality within which global markets operate.

Speaking to VOC News on the the Liberland presentation, many voiced concern that this so-called “experiment” has not taken into consideration what will happen to the gold reserves, as well as the work force.

"We need to wake up from sleep"

Presidential spokesman Ibrahim Kalin, who spoke on the opening speech of the program, said, "The things we will do together on behalf of our future are very important, I have to talk about these issues. It is not very easy, of course, and I admit that the members of the security council here do not want to leave any kind of privilege. "

Stating that the Islamic world should be awakened from a deep sleep, Kalın said, "Now what we see in Europe is moving further to the right, as we have seen in the elections in Germany: they are moving towards neonazi policies that are more or less in the leading European countries.

We have to wake up from this deep sleep, and we have to realize how serious this is. "