Are Germany and Russia friends?

The personal relationship between Chancellor Angela Merkel of Germany and President Vladimir Putin of Russia is often boiled down to certain anecdotes: her put-downs about his role in the KGB and his attempts to rattle her by bringing his large black Labrador to a meeting, knowing her fear of dogs. 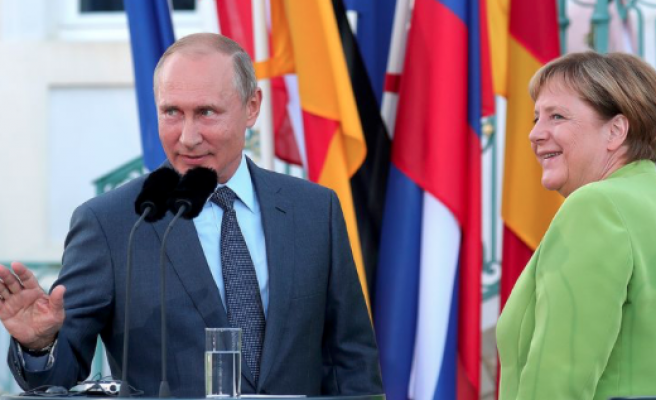 The relationship of the two countries predates that of the two leaders. And when Merkel and Putin sit down for talks on Saturday in the German government’s villa outside Berlin, they will be influenced by a long history of alienation and rapprochements, limiting the expectations — and possibly the results — of the meeting.

Pressed on the nature of the talks, Merkel’s spokesman, Steffen Seibert, indicated the leaders would focus on finding common ground on acute international issues, such as Syria, Ukraine and energy. But he declined to provide details.

“Russia is an international actor without whom it is impossible to imagine finding solutions to various problems” in the world, Seibert told reporters in Berlin.

Many experts expect that the meeting will attempt to put the relationship between Berlin and Moscow on more pragmatic ground, but few expect the session to end with strong resolutions or a new strategic partnership.

Here’s a look at some of the issues that define and influence German-Russian ties.

— Are Germany and Russia friends?

The two countries could be described as the ultimate international “frenemies,” with economic, cultural and intellectual ties reaching back centuries. Since the 18th century, they have cycled through a series of conflicts and reconciliations, most recently World War II and the Cold War.

Throughout the Soviet era, Germany was Moscow’s most important trading partner, and many Germans view the strong, positive ties to Moscow as a key contributor to the end of the Cold War and German unification. When the Berlin Wall fell, Germany reached out to Moscow, partly to help former Soviet bloc countries integrate into the European Union, not only strengthening political and economic ties, but also investing in civil society.

But a break in relations that started with the Russian authorities’ repressive reaction to public protests in 2011 and 2012 worsened in 2014, when Russia annexed Crimea and supported rebels in eastern Ukraine.
Merkel and Putin have maintained regular contact. In May, she visited Putin at his summer residence in Sochi, Russia.

But Susan Stewart, a senior associate with the German Institute for International and Security Affairs, cautioned that the leaders’ meeting in Germany should not be viewed as a fundamental shift in German-Russian relations. Instead, it is an indication of the hope that the two sides will be able to reach a compromise on key points, while maintaining their differences over Russia’s role in the conflict in Ukraine.

“They will be trying a two-pronged approach,” Stewart said. “They will try to cooperate on those points where there is a common interest, but we will not see a return to business as usual.”

— What does Germany want from Russia?

Both Germany and Russia have problems that are tied to Syria.

For Merkel, the issue is domestic, as her decision to allow more than 1 million people — most of them refugees from the war in Syria — to apply for asylum in Germany has met increasing resistance from the public and from her own government. For Putin, it is not being quite able to find a solution to Syria’s civil war despite having declared “mission accomplished” on several occasions.

Both leaders could benefit from finding a way to ensure sufficient political stability in Syria to allow Germany to begin encouraging refugees to return, while Putin is seeking support from Berlin and the European Union to help rebuild the country, said Stefan Meister of the German Council on Foreign Relations.

“It is in the domestic political interest of the German government that Syrian refugees be able to return to a stable Syria,” Meister said.

— What does Russia want from Germany?

Germany’s willingness to throw its full weight behind the United States’ decision to impose sanctions on Moscow over its annexation of Crimea, its involvement in the pro-Kremlin insurgency in eastern Ukraine and the downing of Malaysia Airlines Flight 17, took the Russians by surprise.

The move made clear to Russian leaders that the special relationship they believed they had shared with Berlin was over. Soon afterward, Germany found itself in the crosshairs of Russian cyberattacks and a campaign in the Russian news media that caused Germany to plunge in Russian public opinion.
“If you look at the image of Germany — and Merkel in particular — in Russian political discourse, you will see that it really has deteriorated tremendously,” said Sabine Fischer, head researcher on Eastern Europe at the German Institute for International and Security Affairs.

A survey cited on Friday by Vedomosti, a Russian business daily, reflected this trend, showing approval of the German chancellor among Russians plummeting to 15 percent in August 2016 from 60 percent in February 2011.

But to break out of its international isolation, Russia needs Germany’s support. It hopes to persuade the chancellor not to support a fresh round of sanctions President Donald Trump has threatened to impose over the poisoning of a former Russian spy and his daughter in Britain.

“There is a need for more pragmatic action at the political level,” Fischer said.

— Is Germany a ‘captive of Russia,’ as Trump says?

Germany imports about 40 percent of its natural gas from Russia, according to government statistics. That is more than any other EU country, but less than the 60 percent to 70 percent Trump cited when he accused Germany of being a “captive” of Russia at a NATO summit last month.

“That comment clearly taps into a stereotype in Washington that because of its economic ties, Germany is ‘weaker’ on Russia,” said Derek Chollet, an adviser on security and defense policy with the German Marshall Fund in Washington.

Former Chancellor Gerhard Schröder’s close relationship to Putin and his decision to join the board of Russia’s state oil company, Rosneft, has only bolstered that notion. But Merkel has shown a willingness to draw a line, with her decisions to support sanctions against Russia in 2015 and to join the coordinated response to the poisoning in Britain this spring.

“My sense is Merkel, who in her own way makes clear that she understands the Russians and Putin as a type as well as anyone, has no illusions about Russia or Putin and their motives,” Chollet said.