For a very long time, one of the most serious social disadvantages facing Crimean Tatars has been bad leadership 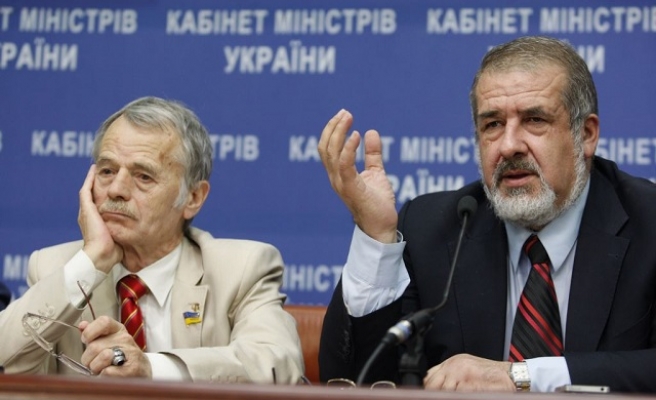 The economic blockade of Crimea enters its sixth day, supposedly an action of Crimean Tatars, but unconfirmed reports allege that the vast majority of people actively involved in enforcing the blockade on the Ukrainian side of the border are Right Sector and Azov Battalion. All the same, the leaders of the Congress of Crimean Tatars (“Mejilis”), Mustafa Dzemilev and Refat Chubarov, are presenting themselves as the prime movers in this drama.

Is this just a desperate attempt by Dzemilev and Chubarov to remain politically relevant? They could have remained in Crimea after the March 2014 referendum, read the Russian federal constitution very carefully, and continued to represent the economic and social interests of Crimean Tatars. It might not have been a bad career, especially considering the federal government's policy of playing the role of sugar-daddy to Russia's various smaller nationalities in recent years.

But instead, Dzemilev and Chubarov chose radically more short-term careers as politically irrelevant opportunists in Ukraine, as representatives with no constituency to represent. Now, having finally seen their miscalculation, they are posing as the power-brokers enacting this blockade in a desperate attempt to appear relevant. The biggest disadvantage which Crimean Tatars have had over these last several years is bad leadership.

I remember interviewing Chubarov almost 2 years ago - January 15, 2014, five weeks before Yanukovich was ousted. Even then, he didn't seem like he had a particularly sharp intellect. The speech he gave in Simferopol that day was the usual shopping-list of social demands, the usual assurances that Crimean Tatars would not be drawn in by "provocateurs," the usual vague appeals for "negotiation" and "dialogue." Nothing in the speech concretely connected to the contours of the political crisis at that time. He seemed to have overlooked the point that the main reason why there was a crowd assembled in front of him was because Ukraine had tripped over into an acute political crisis, and they wanted to hear his thoughts on that matter. He could have been giving a campaign-speech for a local election somewhere in Portugal in 1982, and the speech which he delivered that day would have been no more and no less fitting.

The crowd looked bored - they had heard this shtick before, from the same bass-baritone-voiced, emptily charismatic would-be demagogue. Even at that first meeting, I had a sense that Chubarov was the kind of garden-variety, dim-witted political opportunist who could make a 20-year career of giving exactly the same rabble-rousing speech, night after night after night....

Ukrainian president Petro Poroshenko has stated that he supports the blockade, but in doing so, he has signaled to the international community the juridical vacuum at the heart of Ukraine. If a self-organized, armed militia of private citizens can implement and enforce a blockade, can decide who should be allowed to trade and with whom, then that makes a mockery of the concept of Ukrainian “statehood.” Private paramilitary groups like the Azov Battalion have already been incorporated within the command-structure of the ministry of the interior, and they are publicly financed, but this blockade remains essentially the work of a private militia, both in conception and execution. Furthermore, it makes Poroshenko’s own position even more farcical – the president is willing to express approval of anyone with a gun. Yet again, it signals Ukraine’s status as Europe’s first de facto failed state.

The economic repercussions of the blockade seem to be far more serious for Ukrainian exporters than they do for most of the population of Crimea. It is likely that the blockade, for as long as it lasts, will further enable Ukraine’s oligarchy to privatize small, soon to be bankrupt, companies in the Ukrainian food-processing and agri-sectors. On this basis, it is highly arguable that the agendas ultimately served by the blockade are commercial as much as they are matters of principle.

However, the Crimeans most directly affected by the blockade include people dependent on northern Crimea’s agricultural sector, which had previously sold a large proportion of its produce to the Kherson region of Ukraine. The Crimean agricultural sector employs a very great many Crimean Tatars. Furthermore, Mustafa Dzemilev has also strenuously argued for the discontinuation of water-transmission and electricity-transmission to Crimea. This would decimate large swathes of the northern Crimean agri-sector. Dzemilev seems determined to impoverish his own former constituency.