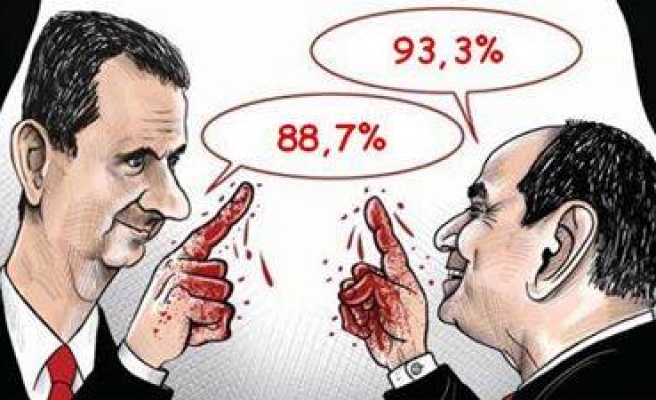 The electoral outcome was predetermined as Sisi had already destroyed all challenge to his power through a series of crackdowns on protests and by jailing and murdering opposition activists.

As perceived by the military junta, bankrolled by the Gulf oil despots, the facade of an election win will provide Sisi a degree of legitimacy. This has been a practice of the Baathist dictators of Syria and Iraq before.

The three-day-long voting exercise to elect Sisi was characterized by threats, intimidations and massive propaganda to get unwilling Egyptians to go to polling stations and vote for their ‘Dear Leader’. However, all these tricks of the junta regime could not intimidate the Egyptians who have been campaigning against the coup since July 3 last year.

Some of the well-known Arab dictators -- Saddam Hussein, Hafez and Bashar Al Assads, Mubarak, Sadat, Boutefilkah -- have tried to build their cults before, orchestrating election wins with more 90 percent votes. Their opponents, if any, got fewer votes than the total number of invalid votes. Sisi’s election victory in Egypt has added another gem to the great presidential victories of Arab dictators.

In the last three presidential elections in Egypt, Mubarak got 89 percent votes, the democratically-elected Mohammad Morsi received 51.7 percent and now Sisi has won by 93.3 percent.

This shows the huge popularity of dictators in the Middle East in general and in Egypt in particular. The dictators are so loved by the masses that they rarely get below 90 percent of popular votes.

Sisi’s opponent Hamdeen Sabahi came third in the race, defeated not just by the coup leader but also by the total number of invalid votes. Invalid votes represented around four percent of the total compared with the three percent Sabahi received.

The Egyptian people will have to fight extremely hard to reverse the July 3, 2013 coup. As the majority of those against the coup are university students and young people, the present regime will continue to suppress them in the coming years. Sisi may force Egyptians to bow their heads but he cannot win their hearts.

The word election is devoid of any sanctity in relation to Egypt’s current political context. It was not an election -- it was tool to provide the power-hungry generals with a deceptive aura of legitimacy.

Despite Sisi and his Gulf backers trying to portray the post-coup interim government as civilian, using a bunch of handpicked opportunists to serve in key positions, the world always knew who was in control in Egypt. The real power lay in the hands of the military that brought back Mubarak-era oligarchs and the brutal security state.

The Egyptian authorities have been forced to admit that the turnout for Sisi’s election was less than 48 per cent. The “rival” candidate -- the luckless Nasserite, Hamdeen Sabahi, who called the election results “an insult to the intelligence of Egyptians”.

Some will of course be joyful in the myth of a “national mandate” from the Egyptian people to a military tyrant voted. They are: belly dancers, Mubarak supporters, effete Saudis, money-hungry UAE sheikhs, hypocritical European Union officials, Israel’s war merchant Netanyahu, the Barack Obama of big speeches.

The new political order should be seen as a blunt warning to the Egyptians: if you do not support the Beloved Dictator, fill your ears with cotton, blindfold your eyes and remain silent until new instructions.

I broadly agree with your analysis