Has the red line not been crossed?

Two years after the sarin gas attack, the people of Douma are still massacred 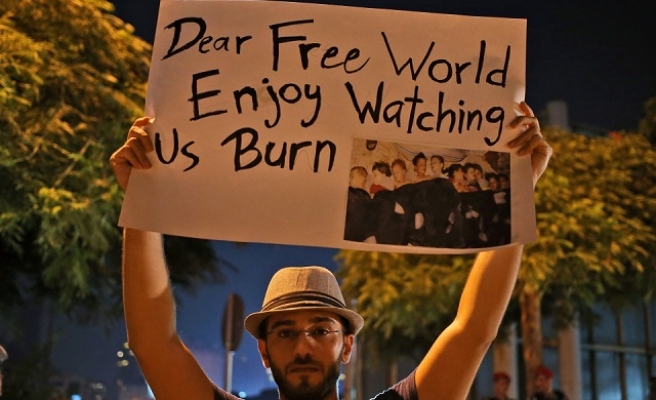 “We have been very clear to the Assad regime, but also to other players on the ground, that a red line for us is we start seeing a whole bunch of chemical weapons moving around or being utilized. That would change my calculus. That would change my equation,” these were the words of US President Barack Obama on September 4 2013.

These words, initially bringing hope to the people of Syria, were believed to have been the US’ last call on the Assad regime.

His words came a week after the August 21 sarin gas attack on Douma which according the US’ estimates killed 1,429 people in an attack which blatantly targeted a civilian population.

The chemical attack outraged not only Obama, but the international community with UN Secretary General Ban Ki Moon saying that “chemical weapons have been used in the ongoing conflict between the parties in [Syria], also against civilians, including children, on a relatively large scale.”

On August 16 of this year Douma made headlines once again as an Assad regime airstrike killed over 100 people in the town.

Regime forces dropped a barrel bomb on a crowded civilian market. Assad’s Syrian Arab Army claimed that the attack targeted positions used by the Army of Islam rebel group, however bodies recovered from the scene were those of civilians, including many children.

Just two weeks later, on August 22, a day after the second anniversary of the sarin gas attack, a second barrel bomb struck an apartment building in Douma, killing at least 50 people. While residents of the neighborhood worked to free those trapped under the rubble, rockets struck the site once more.

Douma, located little over 20 kilometers away from the palace in which Assad lives and carries out his affairs, has borne the brunt of Assad’s cruelty of late. Unlike other rebel held areas of the country, Douma has the unfortunate reality of sitting just a stones throw from the regimes capital.

Regime helicopters and rockets can target the city at ease without risks possessed to them in other areas of the country.

Douma is encircled by territory firmly held by the Assad regime, where rebel groups receive little to no reinforcement or new supplies from other areas of the country and the regime continues to besiege the area preventing the entry of humanitarian aid and medical supplies. The two year siege has deprived Douma of water and electricity.

Two years after the fatal chemical massacre, which crossed not only the White House’s but also the UN’s red lines, little has been done to prevent further attacks on the suburb.

In February, continuous regime bombardment demolished 500 homes in Douma, killing nearly 150 people, 68 of which died in airstrikes and targeting a hospital run by Doctors Without Borders.

While the US and its allies have begun taking military action, conducting airstrikes in Syria, the international coalition only targets positions held by ISIL or the Nusra Front, an al Qaeda affiliated rebel group.

Khaled Khoja, the president of the exiled Syrian National Council, told reporters in February that “Killing children and elders with barrel bombs, using poisonous gases is as ugly as the beheadings and burnings carried out by Islamic State militants. [ISIL]”

His words were corroborated stats released by the IRIN activist organization.

IRIN’s figures paint a picture showing that even though ISIL, known for its brutality and ruthlessness, only accounts for ten percent of civilian deaths in Syria while the Assad regime is behind three-fourths of the lethal attacks on civilians.