How did Mina Stampede happen - Who is Responsible for it? 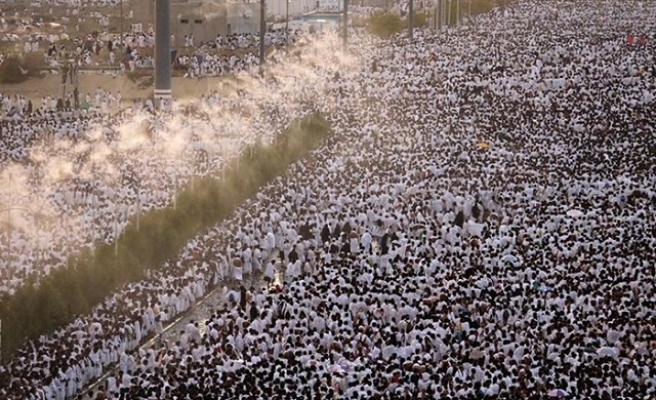 769 Haj pilgrims died in the Mina Stampede, and the preceding week around 107 died in the Crane Crash in Mecca - tragedies which have marred the recent history of uneventful Haj. This year is considered to be one of the worst in the last 25 years of Haj history. The toll is to expected to rise as hundreds more are critically injured.

Being an Emergency Medicine Physician & one of the 20 odd Managers of Indian Medical Centers in Saudi Arabia deputed by Govt of India in 2008 to treat Indian Haj Pilgrims, I have some fond memories as well as earnest observations to share, hopefully giving a better picture for those interested to understand. Our honest efforts are to do some "fact finding" and "medically research" the causes, that lead to these tragic incidents and not to belittle the good work the Saudis and thousands of volunteers, put in to make Haj the world’s best largest peaceful gathering.

Mina is a large scenic place, with rows and rows of tents, the beauty of which is simply mesmerizing. Right beneath the beauty lays the dark facts. All men are equal before Lord, wearing the same unstitched cloth - is sadly and unfortunately - not true. An overview of Mina geographically is essential to comprehend it.

As you stand over the bridge you will notice the expanse of Mina from Jamarat to Muzdaliffah, so much so the tents are now inside muzdalifah. On the mountain top you see the palaces of the royal family, from where they do their rituals, going by a separate route to Jamarat.

Then there are multistory large grey colored buildings, making you think what is an apartment doing in a tent city? These are building reserved for the ultra-rich Muslims shelling out thousands of dollars per night. Even in the tents there are huge differences. The tents near the Jamarat have better facilities and usually booked for dignitaries and the farther the tents from Jamarat the poorer the accommodation.
With the disparities openly seen, is it wrong to ask - do those who buy better resources and get better benefits, ever faced such tragedies? Has Stampede ever happened in areas involving richer tents..??

Why is Mina Prone for Stampedes while the new Jamarat area avoided it?

Mass Gathering Medicine – involves an interesting concept called Fluid Dynamics or Crowd Flow. It is keeping these dynamics in mind, Gensler, World's biggest Architectural firm, designed the Jamarat at the request of Saudi Arabia. Look at the Pictures below, how the design itself of Y shape, wide pillars, curved oval "0" shapes - ease the process, compared to stagnation of the previous model. Even if there is a push the only way out is to exit to the next Jamarat. There is adequate space in between, so much so people can even come in cars to fulfill the stoning ritual!​

Those who have been to Jamarat will also notice that at the edges are police stationed on high raised platforms, watching from above. And if there is anyone tripping, they almost jump down from top to disperse it, then and there.

Compare this to Mina, which is badly designed death trap - in times of disasters. It has "H" and "T" intersections, which are best avoided in such crowded places. It is exactly at one of the T intersections that the stampede occurred. There is absolutely no way anyone can escape if stuck in the connecting T or H.

The side walls are fenced and tall, meaning the only way to escape is to climb on someone and go over the fence. Which is exactly what the people tried do climb over the people and over the fences, some were throwing their children to the safety of nearby roof tops of tents. Unlike Jamaraat Mina roads are not covered. So those who fall down, die an agonizing death in 40C blistering heat. Medically the time taken for death due to Stampede (Compression Asphyxia) is around 4-8 minutes.

With the current Mina design, it is absolutely impossible for any help or ambulance, to come through the congested roads within 10 Minutes to site. Reaching the spot from the Mina Hospital would easily take 15-25 minutes or even more. There are no raised platforms alongside the roads to pick up tripped people, nor do those trapped have any outlet to escape. The only option is to stamp on one another to reach the top, or die. Eventually the staff can only come and pick up the bodies later, with skin blistered and peeled. People are destined to die if there is a stampede in the current setup.

When the rich & powerful can have multistory buildings to reside, wider roads, vehicles for transport within mina, why not others? Do their Lives matter less...?? It’s high time the inherent structural flaws in the design are rectified.

Paul Wertheimer, the founder of Los Angeles-based consultancy Crowd Management Strategies, discussing the ongoing carnage at Mina said, "Part of the problem was architectural — the passageways were too narrow for the crowds. They brought in experts and widened the passageways. But the problem has not been solved. It looks like a classic failure of crowd management."

Modernization of Mina vs High raise buildings in Haram

SaudiArabia not only spends billions but also earns billions in revenue through Haj. Some stats from this article (http://foreignpolicy.com/2015/09/25/failure-custodian-holy-sanctuary-mecca-hajj-stampede-saudi-arabia/ ) will highlight the glaring errors in prioritizing the spending in recent years, especially during the previous Saudi ruler. To Quote verbatim from the article

"Saudis spent roughly $1.2 billion on Mina after 360 pilgrims were killed in 2006. The luxury hotel suites and shopping centers at the Abraj al-Bait and Makkah Clock Royal Tower cost over $15 billion. Saudis have allocated $26.6 billion to expanding the mosque itself, announcing its intentions to increase capacity past 3 million worshipers. This policy is misguided: The Grand Mosque is not where capacity and transit of pilgrims are in desperate need of repair. Grand Mosque had never even been the site of a major disaster, despite the masses of worshipers seemingly ever-present within its walls.(excluding the crane fall which was due to high winds). The Abraj al-Bait complex and an upcoming 10,000-room mega-hotel adjacent to the Grand Mosque similarly miss the point. After repeated tragedies, that (mina) passage demanded careful planning and decisive action to prevent further injury and death."

Iran which wants to be a part of investigations, having lost more than 200 pilgrims, should know that the false propaganda they indulge in needs to stop. Just because they are fighting IS, they can’t assume the Sunni Muslim world will support any action of theirs, good or bad. Iran has a history of playing politics at Haj showning defiant behavior even during Haj times. Their illusion of reviving the Persian Empire by arming rebels in Middle East and exaggerating news does more harm than good, not only to themselves but the Muslim Ummah at large.

If Hajj is about reviving the rituals carried out by our ancestor Prophet Ibrahim, A.S and performing it as the Prophet Muhamamd sal commanded it, then how can they indulge in sloganeering and political activism in Haj which is beyond shameful.

Moreover, there is truth in the statement that, the mina incident happened when the Iranian pilgrims came in the opposite direction not following the original route. Many eye witness accounts support this view. The Iranian propaganda of the Crown Prince Motorcade causing the stampede has no basis, primarily because the routes are entirely different. This has been clarified by Saudi Arabia in an official press release.

Iranian claims of Saudis being incapable of managing Haj, sounds more than hollow, as Iran itself has not been able to provide protection to various important Shia Shrines themselves. It is such exaggerated & unfair criticism of Saudi Arabia that Turkish President, Erdogan refuted this saying “it would be wrong to point a finger at Saudi Arabia which does its best to make the annual Haj pilgrimage possible. You have to see the glass as half full,” he said, adding that each country suffers failures.

Labeling such incidents as “Acts of God” is an easy and wrong way out rather than assuming accountability and responsibility. Errors happen even after good efforts. True, but errors if not rectified they get repeated. If errors are not seen as errors but rather justified, they get entrenched.

Just as a doctor or a hospital cannot afford to refuse or mismanage a case of Heart Attack, by giving excuses that the patient was a smoker or a was having lot of meat / biryani his whole life, will these kind of excuses neglecting deficiencies, be acceptable to anyone..??

To blame large crowds, African brothers, Shias, is to shift responsibility, than make one accountable. It’s unfair and unjust to blame crowd. No one wants to die being crushed to death or crush another fellow Muslim no matter how holy the place is.

John Seabrook, Senior Journalist with NewYorker Magazine, who has extensively researched on Crowd disasters had written way back in 2011 that - "Crowds often take the blame for what are actually failures of planning and logistics".

Nigeria's President Muhammadu Buhari urged King Salman "to ensure a comprehensive and thorough exercise that will identify any flaws in Hajj organisation". All nations who lost citizens, due to humanitarian reasons, have the right to take the case to be independently evaluated, to check if corruption exists in giving out hajj projects as is being alleged widely. Even the allegations of royal convey leading to the disaster, can be easily proved or disproved by releasing the video footage continuously been recorded. Were the staff at Mina adequately trained, as many eye witnesses describe that they were themselves confused at what to do?. Were they BLS (Basic Life Support) certified, as is the requirement for all police or firefighters in western countries?

Eye witness accounts say, it was a combination of all the above factors that lead to this colossal death toll. There should be an open and honest investigation rather than brushing the issue aside - not only for the welfare of the Hajis but also to retain the respect and sanctity of the title Allah bestowed on them being "Custodian of the Holy Mosques".

King Salman and his son, Crown Prince Muhammad had to inherit a difficult legacy from his predecessor and are trying hard to fix the unity of Muslims by cooperating with all including whom the previous kings fought. May Allah help them overcome the trials and spearhead a positive change in Muslim affairs not only in Saudi Arabia but all over the world?