The massacre in Ankara should be viewed in the light of the new "spheres of influence" that are currently being formed, emulating the Sykes-Picot Agreement. 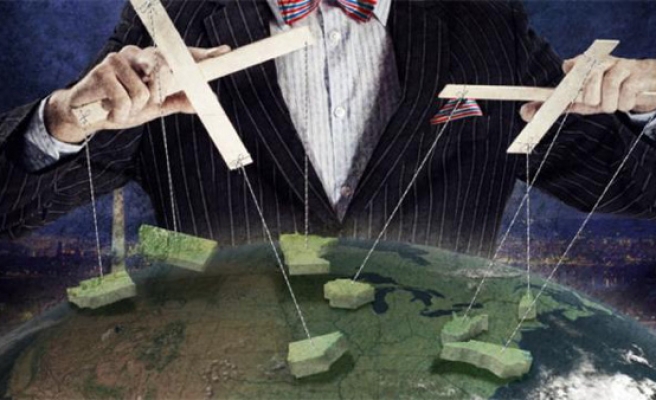 The massace that took place on Black Saturday is a slaughter that will be etched in the memory of this land for a long time to come.

The Sykes-Picot borders were not framed by blood. It was destroyed by the spilled blood on all fronts stretching from the Ottoman Dardanelles, extending to Palestine, Basra, and the Caucasus. The Middle East was the resultant balance of this equation. But those statesmen who have not paid any price have also risen to new ground. There was no political reason for the establishment of a separate Iraqi and Syrian state.

The resultant maps from the Sykes-Picot Agreement fed the imperial ambitions, and scrambled the lines of the regions cultural and historical genes. The events morphed into a strategic post cold war strategy. The existing boundaries made way for a new balance. The British imperialistic mission was contracted out to the United States, with Russia in the role of rival in this new cold war equation.

Despite the polarization of the Eastern and Western borders, the political borders didn't change immediately; they continued in the legacy of the Sykes-Picot agreement. Despite the majority of the people having ownership of the same language and religion, a makeshigt collar in the form of a new national identity was created. This made its way to the end of the cold war era. Turkey had already opened its sails to a new world, creating a wall between itself and the Middle East. The Arab nations also continued played politics with their artificial borders. The only real factor in this was route taken by the oil pipelines.

This preamble of mine is to show the resistance of the ethnic and sectarian groups despite the fragmentation of the Middle East. There are still obstacles in the path of the Sykes-Picot agreement. What it does show is that now there are new actors, and new strategies in place, irrespective of the global balance or rivalry.

The process that commenced with the American invasion of Iraq give sufficient clues as to what sort of global balance and administration will take place. The sectarian axis and bloody nationalistic wars are made to appear to world  as if the European history has had a late entry to the world stage

In brief, a forced sectarian conflict imposed on Iraq and Syria has spilt blood between the two countries. A similar conflict on ethnic grounds is now being attempted. The Sykes-Picot had managed to tear apart the nationalistic boundaries but failed at the humanitarian and cultural geographical boundaries.

The post Sykes-Picot balances that appear on the horizon up to now have not changed the national boundaries however the Middle Eastern humanitarian and cultural map is on the brink of disintegration.
As a summary, the tragedy of Iraq was a sure sign of an awaiting disaster. The Sunni-Shina conflict of Iraq, the nationalistic based Kurd-Arab clashes leading to dissolution has waged on. The sectarian conflicts that have now been carried in Syria, rather than being local factors have turned in to a fully blown regional proxy war. Behind all of this, the global hegemonies are casting new actors in their place, lurking and bidding for their time.

The aim of this new era of conflict is take stock of social engineering before political gains. Building factions based on hatred and blood, highlighting differences, tranforming history into a tool of hatred is part and parcel of social engineering. Suicide bombers that symbolize sectarian and nationalistic differences, killing innocent people forms the political landscape of this social design.....

The anger that has sparked accusations resulting from the massacre in Ankara, can interpreted along the lines of this perspective. The seeds of blood and hatred forging social polarisation are being sowed with persistence in Turkey. The political objectives of those who feed off blood and are ready to annihilate the soul of this land without blinking an eye are to be feared.

Etched deep in its memory, this country up to now has ruined the games of many. The mindset of politicians who engage in ideological rage, those who take the oppressed and twist it into ethnic and sectarian grudges, is well and truly alive.

More importantly, watch the pupeteer not the puppet.....