Is Russia preparing for the next great war?

From the Mediterranean to Siberia, Moscow is flexing military muscles in largest-ever war games in modern Russian history 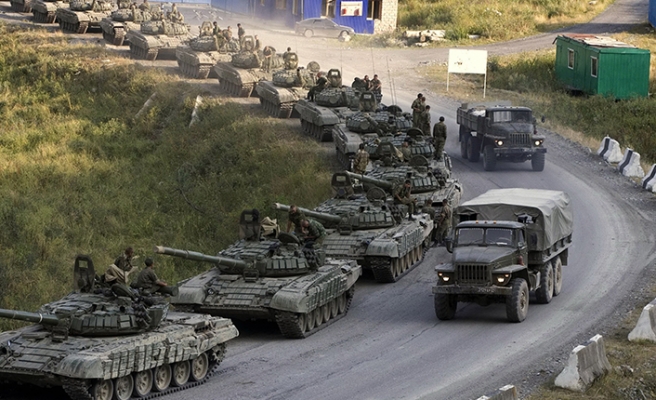 With 300,000 military men, more than 1,000 planes, helicopters and UAVs, 36,000 tanks, and 80 naval ships Russia is showing off its military might in the largest-ever war games in the country's history.

The Vostok 2018 (East 2018) war games which started on Tuesday come on the heels of the country's first-ever military drills in the Mediterranean since the collapse of the Soviet Union, held between Sept. 1-8.

"The Russian authorities are confident that after 2020, the probability of conflicts associated with a struggle for a living space will increase dramatically, which is reflected in the Plan of Defense of the Russian Federation until 2020," Russian military observer Pavel Felgenhauer told Anadolu Agency.

"First of all, it will be a war for resources, and Russia has a lot of them, so the Russian authorities expect that the country to be attacked from all sides and because of that strengthen all lines of defenses," he said.

Felgenhauer said talks about the possibility of a war that involved Russia already circulated during the Ukrainian events of 2014.

"In 2015, sudden inspections were carried out in the Russian army, which showed a low level of its combat capability," Felgenhauer said.

"After that, a large program of rearmament and retraining of the Russian Armed forces began. Vostok-2018 are the final stage of this preparation, a general check of the work done," the expert believes.

Felgenhauer stressed that the situation in Syria, where he said the probability of a direct conflict between Russia and the U. S. is very high, aggravates the situation.

"I'm not saying that the World War III will begin. But the probability that a war can break out is higher than zero. Perhaps it will be like during the Cold War, which was 'cold' only in the European space, but in the Middle East, Africa, South America, and Asia, it was accompanied by serious military conflicts," he said.

Felgenhauer also noted that one of the ways you can prevent conflicts is to show your potential enemy the level of your military readiness.

According to military analyst Sergei Ishchenko, Russia's goal is to avoid a possible confrontation.

He said that is the reason Moscow has decided to hold the massive drill far away from the NATO borders.

"In the coming days, the Americans in Alaska will have a unique opportunity to see closely the Northern Fleet units in their binoculars," Ishchenko said.

An expert at the Russian Council on International Affairs, Anton Mardasov reminded the extent of the participation of the Russian military forces in the drill.

"The Armed Forces of the Russian Federation has some 1,902,758 people, including 1,013,628 soldiers. So, about a third of all Russian servicemen will be involved in the maneuvers," the expert notes.

According to Mardasov, one has to keep an army busy in order to keep them in shape.

"When there are no wars, military exercises replace them. The larger the exercise, the more tasks for the military have to perform, and by working out tasks, they increase the level of qualification," he said.

"This is a very unusual event," Oktay Tanrisever, an international relations professor from Turkey's Middle East Technical University, said, underlining that this is the first time Russia plays war games of this scale in the Pacific since the Cold War.

Tanrisever said for the last three or four years Russia has been conducting large-scale military drills in major sites and in the western parts of the country.

"But this time they conducted a bigger military exercise in the eastern part of the country," Tanrisever said.

"Russia seeks to demonstrate that it is able to cope with large-scale military challenges through these exercises."

The exercises provide Russia to demonstrate that they have sophisticated weapons-systems, he added.

Tanrisever said since Ukrainian war in 2014 and Russia's annexation of Crimea, its relations with NATO and the U.S. has deteriorated considerably.

"This is the reason why in the last four years they have also conducted other military exercises," he said.

Tanrisever said all these show that Russia is being prepared for a total war, to give a message to the U.S. and NATO that Russia is militarily strong and it can deal with challenges.

He said Russia was also concerned about the deployment of British and the U.S. naval forces in the eastern Mediterranean, which is why, he said, Moscow had conducted a smaller scale drill there.

"But those drills [in the Mediterranean] were as important as the current Vostok military exercise," Tanrisever stressed.

"Because the eastern Mediterranean is one of the most crisis-stricken regions in the world," he explained.

"These developments are important... But the exercises should not be really understood as readiness to start a conflict. It is just a show business," he added.