Within the last month, Egyptian navy began to arrest and injure Palestinian fishermen. They even damage fishermen's fishing boats.... 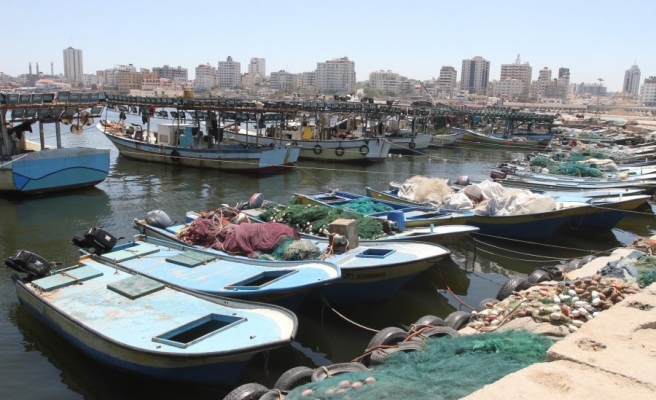 It is reported by famous internet website The Electronic Intifada that, in the last few weeks, the Egyptian navy is harassing Palestinian fishermen on a continuous base by arresting and injuring them and damaging their fishing boats. The shift of power in Egypt since July 3 has not just led to border closures for those wanted to cross into the country from Gaza. Besides, it caused a rapid decline in the transport of basic goods, which is partly affected by the restrictions on fishing rights.

The Egyptian army expressed that it started its operations in the eastern Sinai Peninsula in late June. Since then, it has destroyed more than 440 tunnels between Egypt and Gaza. According to estimation of the UN Office for the Coordination of Humanitarian Affairs (OCHA), there are only ten tunnels now operating. There used to be at least 300 operating tunnels prior to the clamp-down.

Under a stiffing Israeli and Egyptian blockade, the tunnels are the main commercial trade routes in and out of the Gaza Strip. Besides, they are the only way in or out that does not go through Israel, which heavily restricts crossings. According to the Agreed Principles for Rafah Crossing, signed by the Palestinian Authority and Israel in 2005, Gaza could be able to have formal trade relationship with the Egyptian side, but this deal was frozen when Hamas began to govern Gaza in 2006. Egyptian discourse on the tunnels is that they are a security problem for Egypt because they enable the smuggling of weapons and drugs, and militants to Sinai. The Hamas government has strongly denied that the tunnels were being used to provide a passage for the armed militants.

The restriction by Israeli navy on Gaza fishermen that restricts them from traveling more than six miles from shore severely limits their ability to catch fishes in sufficient quantities. Egypt used to allow fishermen to enter its waters. Nevertheless, within the last month, Egyptian navy began to arrest and injure Palestinian fishermen. They even damage fishermen's fishing boats.

Egypt arrested five Palestinian fishermen on 30 August. The authorities charged them with breaching Egyptian international waters, and sentenced them to one year in prison and fined $60 each. Previously, the fishermen were allowed to reach the shores of al-Arish (a major city in Sinai). However, the things have radically changed in last few weeks.

Although Gaza fishermen were cautioned to stay away from the borders after the arrest, three days later, two fishermen were injured, and their boats were shot at by the Egyptian navy, this time in Gaza’s waters. According to the Fishermen’s Society, there were other attacks on fishermen over the last couple of weeks inside Gaza’s waters.

Despite its long shore, due to Israeli blockade, Gaza met approximately 50 percent of its fish needs through the tunnels and catches in Egyptian waters until recently. According to the UN agency OCHA, almost 118 tons of fish transported to Gaza through tunnels before July. It is obvious the clamp-down on tunnels affected food security in Gaza, The World Food Program (WFP) estimates that it will have to meet the needs of an additional 50,000 to 60,000 persons if all tunnels are closed entirely. The current situation has parallels to late 2009, when Egypt constructed a wall at the border with Gaza. But this time, people in Gaza will face harsher conditions than they had to experience at that time.

OCHA reports that the closures created tremendous shortages of goods, including cheap fuel and construction materials. For the purpose of avoiding a humanitarian crisis, the Hamas government in Gaza has called on Egypt, other Arab countries and the US and its allies to help in establishing a legal commercial zone and reopen the crossing for commercial purposes.

There is also a rapid decline in the amount of construction materials entering Gaza. Last week, it was less than 100 tons on a daily base, which is only a small fraction of 7,500 tons of materials Gaza was receiving every day in June. The World Bank recently said the measures were expected to cause a significant decline in construction activities in Gaza over the coming months. As a result, about 30,000 workers in the sector were now unemployed because of the halt of materials imports from Egypt, and the following increases in prices.