The change in Tunisia is now mostly interpreted through the power struggle between secular elites and Islamists, the elections and following coalitions with increasing military influence 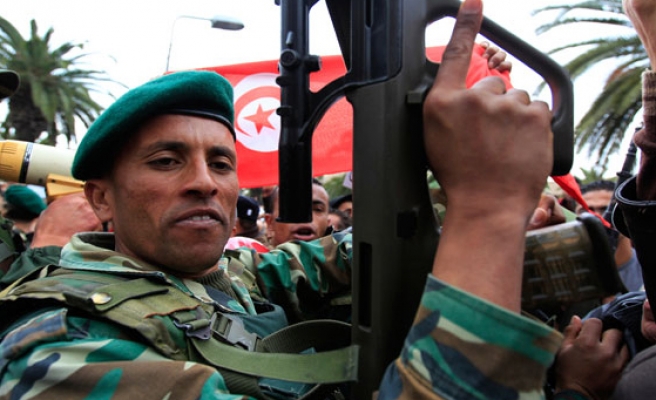 Tunisia, which is considered the sole success story of the Arab Spring, becomes more and more democratized, the country's military power increases. Although this seems like a complete paradox, it actually shows one of the basic dynamics in how the change in Tunisia took place.

The increasing visibility of the army's military capacity and its influence in the administration in Tunisia has become even clearer in the recent clashes. The clashes with Daesh-affiliated factions in the Tunisia-Libya border region served as litmus paper for the Tunisian army.

The change in Tunisia is now mostly interpreted through the power struggle between secular elites and Islamists, the elections and following coalitions. Whereas, the experience in Tunisia is as interesting as it should not be overlooked in terms of intrasystem balances.

The police being seen in the foreground when the public uprising began was quite surprising for those who are foreign to the balances in the region. Yes, Tunisia was a dictatorship and Zine El Abidine Ben Ali was a former military officer, but this was a police state. Unlike the military character of Iraq's Saddamist and Syria's Assadist Baath regimes, here, it was the police's influence in the system that was indisputable. Thinking that a strong army would always be a threat to their own authority, both Habib Bourguiba, the first president of Tunisia, and Ben Ali, brought to the foreground the police - which they could control easier - with the army literally pushed into the background. This did not give rise to the concern that the national army would not meet the country's national defense needs, because as long as colonial relations were kept warm, there was no need to worry about cold war balances. It was important that they played the role cast for them and protected the status quo.

There were two great threats for Ben Ali: one was the Islamists and the other was the military which had the potential to carry out a coup. While the Islamists, who received more votes than anticipated in the 1991 elections, were deactivated, some 200 commissioned officers would be dismissed.

The defense ministry's having a budget half of that of internal affairs at the time the Tunisian uprising began clearly shows the situation.

The answers to questions such as what replaced the collapsed dictatorship in Tunisia, how the system will shape, how the relationship between Islamic movements and secular powers and the governing power will shape, how these relationships will reflect on the resolution of the people's fundamental problems will continue to be sought. However, as intrasystem transformations continue to take place, evaluation based solely on parties and the apparent political polarization will be insufficient. The influence of the military on intrasystem balances and how determining it will be in politics as an armed force in an atmosphere which the state is being re-formed, is generally kept off the table.

However, the system is being re-woven and sensitive balances are being set during this process. While there were only three military-based governors during Ben Ali's term in office, there are currently 11 governors selected from among soldiers. Increasing 21 percent annually, the army's budget is now the most growing budget. While new weapons are arriving with the new agreements and connections made with the U.S. in particular, the international dimension of the increasing military influence is also taking shape. The rate of the increasing political and economic impact of countries depends on who provides the most arms. The strengthening of the military would reflect on bureaucracy and the number of military members in critical decision making mechanisms would clearly increase.

It is possible to say that with increasing military influence, a kind of balance is tried to be set with the interior ministry - to which the police is connected - losing its previous power. The Egypt example stands as the painful experience of how amateur actions taken without balancing military influence and without taking into consideration the military bureaucracy, which holds under control a significant part of the country's economy, can result. What happened in Libya can also be interpreted as the story of everything coming apart at the seams with the militia replacing the weakened central military of the Gadhafi era.

It was witnessed how misleading it could be to be suddenly caught up in the romanticism of revolution without knowing the Arab geography that is within the grip of military dictatorships, single-party regimes and dynasties. To avoid falling into similar situations, like in every social and political transformation movements, internal dynamics, power sharing and their ideological backgrounds, mentality transformations need to be followed carefully.

While the results of the ideological political struggle determine the change in Tunisia, in the background, the question of which section will take over the position of the protective forces of the established order will also be determining. As the armed forces are currently being empowered as the balancing element, which section of the people and ideological tools will be determining the general staff is just as important. While previously commissioned staff were accepted solely from the coastal strip, relatively wealthy sections, questions such as how this tendency will change are important for the future vision.

The dictatorial regimes inherited from the colonialist Middle East, will probably be stretched and changed one way or another, but the will that is going to replace it is just as important as the change. Tunisia is undergoing an interesting experience in terms of military-civilian relations that is worth following.

We noted all this to remind that the think tanks, media and diplomats of the states which we accuse of colonizing the region, are diligently following all these dynamics and they are able to attract our attention only with their reports taking place in the media. We should ponder a little upon why we are listening to heroism rather than analysis despite organizations referred to as "think tanks," that emerge with a new brand every day, and "politics and strategy experts."
Last Mod: 24 Mart 2016, 14:06
Add Comment