Mumtaz Qadri and Bangladesh Islam Ban: What We Need To Understand

Bangladesh’s High Court rejected a petition brought by secular activists challenging Islam’s status as the country’s official religion, so what does it entail 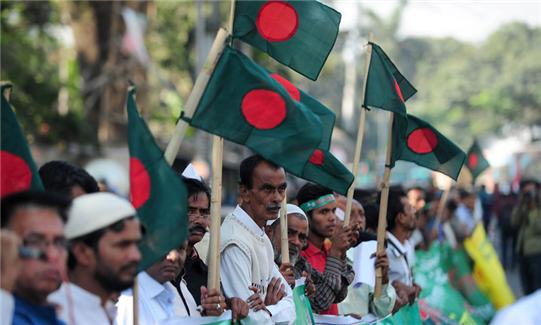 Donald Eugene Smith, in his 1970 book Religion and Political Development, wrote, “In traditional societies, religion is a mass phenomenon, politics is both: in transitional societies, religion can serve as the means by which the masses become politicized.” Although confined by the strains of a Euro-centric worldview, in which secularism is necessarily seen as the one of the penultimate goals of the modern nation state, the above general statement has held true in many a case in the Muslim world. The reality of the unescapable colonial legacy has meant that the modern Muslim states are based upon the model of the European nation state, with nationalism acting as the underlying cohesion factor. The catch, however, as pointed out by orientalists such as Bernard Lewis and others, has been Islam, especially its nature to form a loose bond of brotherhood among its adherents, collectively labelling them as an Ummah. Moreover, the legacy of centuries of Caliphate rule have conditioned the Muslim mind towards allegiance to the Ummah, something that undeniably remains an integral part of the Muslim personal identity today. Whether that negates or overrides national identitiesis however, another matter, and perhaps beside the point. Considering this alongside the prior statement of Smith, the nature of Muslim nationalism has been different from European nationalism, more so in the context of the traditional Muslim societies in relatively nascent states such as Pakistan and Bangladesh.

The state of Pakistan was created as a result of the end of the British colonial era and the division of India along communal lines in 1947. Although initially envisioned as a homeland for Muslims by greats such as Allama Muhammad Iqbal, the presence of an elite class of bureaucrats that was a remnant of the British colonial period meant that such a state did not materialize and ‘Muslim nationalism’ took over. This meant that religion simply became the means by which the masses were politicized, and not as a force for Islamic revivalism or reform of society. In addition, forces calling for real changes in terms of Islamic revivalism and renewal were either oppressed or marginalized, and thoroughly mislabeled. The result of decades of such policies, along with other factors such as bad governance and frequent Western intervention in internal affairs, can be seen today in Pakistan, with masses demonstrating against the recent hanging of Mumtaz Qadri, convicted killer of Punjab’s former governor Salman Taseer. The latter had spoken out against perceived misuse of blasphemy laws in Pakistan, upon which Qadri, his personal bodyguard, had assassinated him in 2011, perceiving his words to be against Islamic law. The support for the blasphemy laws continues to be intense among the masses in Pakistan, despite the fact that the laws were formulated by the colonial era British administrators, and despite the fact that such laws remain subject to misuse. As such, the law has become synonymous with the inviolable image of Islam and Shariah law among masses in Pakistan.

Bangladesh, which became independent from Pakistan in 1971, has been a similar case of Muslim nationalism being used for the political effect. Sheikh Mujibur Rahman of the Bangladesh Awami League, the founding father of Bangladesh, despite drawing a secular constitution, stressed that he “was a Muslim and a Bengali” in his popular and fiery public speeches.After his assassination in 1975, the Bangladesh constitution was amended to include Islam as the state religion, and the political discourse that followed was intensely nationalistic, yet devoutly Islamic. Through decades of authoritarian rule, the forces calling for Islamic renewal and revival remained marginalized and suppressed alongside others. After democracy was allowed to work after 1991, political Islamists were briefly allowed participation in the democratic process, with the Jamaat-e-Islami being a major government ally from 2001-2006, landing two minsters in the cabinet. This run however, was not allowed to continue for long, as after the army supported government till 2009 and afterwards,

Islamists have been marginalized and subject to routine state repression. Despite such measures, the Bangladesh authorities have tried to maintain their legitimacy through promotion of religious activities and groups they deem ‘safe’ and ‘apolitical’, such as the massively attended annual TongiBishwaIjtemaevent of the Table egh Jamaat, an Islamic organization stressing upon apolitical Islamic da’wah. The regular attendance of high profile, commonly perceived secular personalities, both from the government and opposition, is but a means of attaining legitimacy in the eyes of the masses. Decades of inappropriate machinations and conditioning of the religious sentiments of the masses however, have begun to show. The recent public controversy over a petition in the High Court regarding ban of Islam as a state religion in Bangladesh is one such example. Hefazat-e-Islam, a popular ‘apolitical’ Islamic organization drawing support from hundreds of thousands of madrassah students, perceived the ban on Islam as a state religion as an issue worthy of ‘defenders of Islam’, terminology it associates itself with. Other Islamic organisations joined the protest as well, with a major political Islamic party calling a strike on the day the verdict was given by court. The petition was predictably dismissed from the High Court, with the government and its compliant media displaying bare minimum involvement with the issue. The narrative after the verdict was that of the victory of the Islam loving masses who had saved slam. The Islamists themselves had used religion to serve as the means to politicize the masses, and the government had complied. Arguably, the image of both the opposition and the government, one for opposing the ban, and the latter for dismissing the case, had risen, granting both legitimacy in the eyes of their respective supporters. The status quo however, has not changed, with a steadily authoritarian government accused of rampant rights abuses and worsening law and order situation, unimpeded.

It is high time for concerned quarters, whether in Bangladesh or Pakistan, to realize that politicization of the masses in the name of religion in the current political framework, is not just limited in scope, but dangerous when misused, especially when much remains deficient in such societies in terms of education, economic disparity and the rule of justice.