Myanmar's Suu Kyi: A strong Leader or a Spoiled Activist? 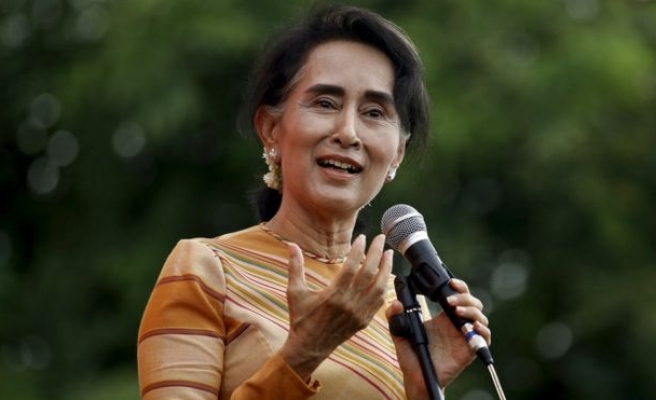 In the last week of March, many parts of the Muslim world got shocked by the news about Aung San Suu Kyi, a prominent Myanmar figure whose struggle for human rights and democracy in Myanmar earned her Nobel Peace Prize. But it was not the news about her former personal driver sworn in as Myanmar’s first civilian president in 50 years or her party controlling the government single-handedly for the first time that made it into headline.

In 2013 Suu Kyi had given an interview to BBC Television. This was the time when she was free for 3 years after got released from 2 decades of house arrest. She was having an Obama moment, where her power and popularity in Myanmar was skyrocketing, with her party winning almost all of the seats in parliamentary by-elections in 2012. It seemed clear she would inevitably have a lot of say in determining the country’s future. So it was natural for the interviewer to ask questions about problems in Myanmar, including Rohingya problem, an ethno-religious cleansing where the victims dubbed as ‘Muslim foreigners’ even though most of them have native Myanmar roots dated back centuries ago.

But instead of calmly answering the questions or acknowledging it as a problem, Suu Kyi got disturbed. Not only she said that ‘both sides’ made some mistakes, she even tried to put blame on the Muslim community, the community whose voting rights deprived by the Myanmar Junta simply with reason of ‘being from Rohingya (Rakhine, as they call it) Muslim background’. Her comments were revealed in a new book, The Lady and the Generals: Aung San Suu Kyi And Burma’s Struggle For Freedom, by Peter Popham. Yet when even more disturbing is not this attitude coming from a ‘heroine’ who was known for fighting democracy in this third world Asian country, it is her anger for the content of the interview and her resentment to the interviewer itself. She reportedly said in an off-air comment “no one told me I was going to be interviewed by a Muslim.” The reaction was almost immediate.

People could not believe these words came out from the mouth of a person who spent decades of her spent under house arrest, whose friends and followers are tortured beyond limits, who herself cannot attend her husband’s funeral, and who herself claimed she would help and serve all the oppressed in her country. Some people instantly said her inability to defending Muslim’s right as synonymous with ordinary Myanmar rights as a sign that she’s not the champion world is seeking. Even some Indonesia’s liberal figures started a petition for the withdrawal of her Nobel Prize, saying her subjective defense to human rights make the prize no longer relevant.

For me, there are two arguments for us to consider before judging who Suu Kyi actually is. And these arguments are strongly related with Myanmar’s culture.

Myanmar is a Buddhist-majority nation whose ethnicity is diverse, even though the Bamar, as classified by the Junta, forms almost 70 % of the demographic composition. Historically Muslims are comprised of 2 ethnic origins, the ‘Malay’-Bamar muslims originating from southeast of the country and Rohingya/Arakan people from the country’s west, just at the border with Bangladesh. Whereas the

‘Malay’-originated Muslims (sometimes called Malay-originated since they have distant historical connection to Thai and Malay people in southeast) treated relatively better, the Rohingyas/Arakans are different, Muslims are only 4 per cent of Mysnmar’s population. They are subject to excessive discrimination, deemed as foreigner coming from the Indian subcontinent. There widely-held prejudice that the Rohingyas collaborated with British during the colonial era, as some Indians are placed as second-rank bureaucrats in the colonial Burma, while the british were the first rank and ‘native’ Myanmarese were at the lowest rank.

In that regard, in first argument we can safely says that Suu Kyi is one of the product of the same society. More or less she share some of these prejudices, as society create leaders, few are the opposite. This prejudice is embedded into the way she thinks, with preconceived notion. So when Rohingya’s plight is touched upon, her automatic response would be, in harsh and simple way, ‘they are terrible people, they conduct many mistakes’. To be fair, she is indeed having high concern for her people’s future. She spent years travelling Myanmar (before her house arrest) despite the military regime’s pressure having endless powers at the time. She may very well know what the Rohingya Muslims are facing is horrible; s he yet opted the ‘real’ politic and prioritized the ‘real’ Myanmarese first.

In second argument, we must pay attention to her way of thinking. She is a brilliant strategist who in 1990s, in the middle of military regime’s watchful eyes and also western and ASEAN countries lack of real/ground support, succeeded in winning the election. She is, after all, an Oxford graduate whose multicultural environment often led to open-minded thoughts. She knows that most of the populations care most about their welfare and safety, daily bread and butter issues. Prejudice against Rohingyans is one of daily beliefs there. She may consider that at this moment of time it is ‘not worth’ the value to openly voicing for the rights of Rohingya Muslims, as it can be used by her political opponent, not least by the powerful military, that she is a tool of foreign interest. One of the reasons why military refused to acknowledged her 90s political victory was her husband & children, who were foreign citizens. It might be behind her thought that once she manages to reform Myanmar, make the ordinary citizen’s life better and wait for military eager to shares more power then she can begin to provide essential rights and security to Rohingyans/Arakans Muslim community.

It is up to our judgment whether we would believe the first or second argument. She may have her own calculations, but her reluctance in defending thec rights of persecuted Rohingya people shows that she’s indeed not the same leader the world previously thought she was, an absolutely brave and sacred activist. But one thing is clear, if Suu Kyi failed to bring prosperity to her people, no matter which of the arguments is correct, Rohingyan Muslims won’t have better future in Myanmar.