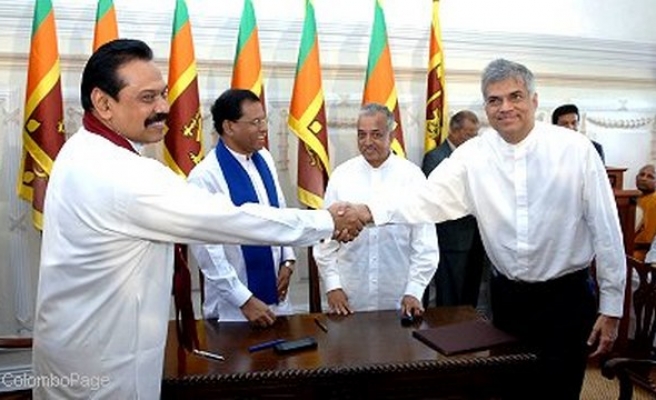 With Ranil Wickremesinghe’s swearing-in on Friday, August 21, 2015, as the Prime Minister for the fourth time, a new era of political coalition seems to have begun in Sri Lanka's history. His center-right United National Party (UNP) had a crucial victory in the August 17 general election but fell seven seats short of an outright majority in the 225-seat chamber.

A power-sharing deal was signed between the UNP and the opposition United Peoples' Freedom Alliance (UPFA) and its main constituent, the Sri Lanka Freedom Party (SLFP).

The poll outcome is definitely a triumph for the president, Maithripala Sirisena, and a clear public endorsement of his reforms oriented policies. He had defeated his former boss Mahindra Rajapaksa in a presidential election in January and called an early parliamentary vote to secure a stronger mandate for reforms. Although it could continue till April 2016, the Parliament was dissolved on June 27 under some peculiar circumstances, when President Srisena found it almost impossible to carry on his reforms agenda due to the opposition from his “own party-men”. He took a gamble and called for a fresh parliamentary election.

Rajapaksa had again tried to stage a comeback as premier and contested against Wickremesinghe. However, his attempt to get a second entry was summarily rejected by mature electorates of Sri Lanka. Rajapaks'a defeat in the polls has further cemented the hold of Sirisena over the government and on the Sri Lanka Freedom Party (SLFP).

This is the first time that two arch rival political parties have shaken hands to form the government in the country that is still grappling with the problems and challenges of 30 year-long civil war and dreaded LTTE-led Tamil militancy.

It should be noted that both President Srisena and Rajapaksa, belong to the same political party, SLFP. Sirisena had succeeded him as the party’s leader in January. After the recent victory, he has purged Rajapaksa loyalists from the senior positions in the party. Now a group of Sirisena followers is expected to cross the floor of parliament to join a broad-based national unity government led by Wickremesinghe.

Perhaps Sri Lankan people didn’t like the antagonistic personal and political actions when the UPFA, effectively controlled by Mr. Rajapaksa, tried to derail Mr. Sirisena’s reform programme. It is worth recalling here that during the height of the parliamentary election campaign, Sirisena publicly declined to appoint Mr. Rajapaksa as prime minister, even if the UPFA won the majority of seats. Just two days before the election, Sirisena took an unexpected decision and sacked the secretaries of the SLFP and the UPFA, who were Rajapaksa loyalists. This had jolted the Rajapaksa camp. Srisena played his political card very well and took control of the SLFP and the UPFA.

Soon after taking oath, Wickremesinghe drew a Memorandum of Understanding (MoU) that has proposed to set up a constitutional assembly to draw up a new constitution that will ensure ethnic harmony and reconciliation with safeguards on human rights. The two parties will stop crossovers from either side during the period of the MoU. The new prime minister also struck a conciliatory note appealing to all political parties to work together to heal the “divisions of the past”.

Now with outside help, the centre-right alliance can hope to muster the required support to pass the proposed constitutional reforms that would make the government more accountable and simplify Sri Lanka’s complex election laws. The incessant power struggle between the current and former presidents has always overshadowed the pace of the development in this island nation. The government will introduce electoral reform to scrap the current proportional representation system of elections.

The new government is also faced with the immediate challenge of handling the UN Human Rights Council report on the alleged war crimes, which is due in September, just in a few weeks. Even if the new government works on an agenda of compromise, the path is fraught with danger and risk of provoking anger among Tamil activist constituencies, at home and abroad.

On the external affairs front, it said, Sri Lanka would adhere to a policy of non-alignment. This clearly means that new government wants to shake itself out of the stranglehold of China, which had made deep inroad during Rajapaksa’s government.

Wickramasinghe has said he would strike trade agreements with China and India as part of attempts to persuade global companies to establish new export-focused facilities in the country to target Asia’s two largest emerging markets.

“We will be calling for investment and we must go for the next generation of reforms,” he said, adding, “It looks as if the Bay of Bengal region is changing, where Bangladesh and Myanmar will be the low-wage manufacturing bases, so we have to have higher skills and higher wages.”

One should not forget that Sri Lanka is not like other poor South Asian countries. Rather, it is the wealthiest country in the region in terms of the gross domestic product per capita and the literacy rate is also quite high. However, due to the dark shadows of three decade long civil war it had to face great economic hardship. For long the country has been struggling to develop new export industries to replace its traditional reliance on garments, rubber and tea.

There are two significant political consequences of this parliamentary election. First, the decisive victory has paved the way for the formation of a stable government. With this clear mandate the government can undertake the reforms process more smoothly without any major obstacle. Secondly, and no less important, the defeat of its strong ally, Rajapaksa, has dashed the hopes of China to turn the Indian Ocean island into a maritime outpost.

It seems that this victory has also shaken China’s confidence and thwarted its plan. Soon after the swearing-in ceremony of Prime Minister Wickremesinghe, a very strange sort of article came out in the Chinese official media. The main thrust of the article was: "The new (Sri Lanka's) government’s wish to get investment and assistance from India is unrealistic. India itself needs enormous funds to improve its own basic infrastructure. Despite (Indian Prime Minister) Modi's ambition, the Indian government is not capable of providing large investment and loans.”

Even more strangely, the article projected a completely new policy line for Sri Lanka and tried to play the Japan card. “Despite rivalry with Japan, China is ‘willing to see’ more Japanese investments in Sri Lanka as the two have common interests in safeguarding freedom of navigation in the Indian Ocean," said the article, asserting further, “India is not against Japan's presence in the Indian Ocean."

Besides the strange assertion, this addition of fourth side of Japan in the existing India, China and Sri Lanka triangle is quite unexpected and likely to further complicate the already difficult situation there.

However, according to the present signs on the walls, under the new strong pro-reform dispensation, Sri Lanka’s investment ties with China are set to continue, albeit within a broader framework and with more freedom.