The clashes in Sinai give a major trump card to the coup administration the coup supporters. The new administration seeks to justify its presence by drawing a connection between the developments in Sinai and the Muslim Brotherhood. 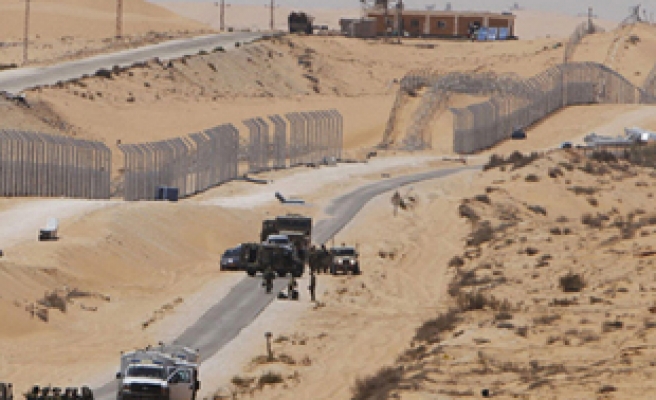 Amid concerns about Egypt's future following the overthrow of its first elected president Morsi through a military coup, developments in the Sinai Peninsula are raising concerns that the country will be drawn into an atmosphere of violence. As attacks by armed groups along Sinai’s border with Israel become more frequent, the Egyptian army is conducting operations by land and air. It appears inevitable that the tensions which escalate in Sinai with each passing day will affect the balance of the region, particularly Gaza, as much as the future of Egypt.

The Sinai Peninsula, separated from Mainland Egypt by the Suez Canal, is known as a difficult to control region due its desert and mountainous geography. The Sinai, which changed hands between Egypt and Israel during the Arab-Israeli wars, remained a part of Egypt according to the 1979 Camp David Accords which generated a cold peace between the two states, while prohibiting the Egyptian military from stationing troops besides border patrol in the area. Whether owing to its geographical conditions or the Egyptian state not being in complete control of the region, Sinai has become a protected zone for armed groups, and has led to Sinai, which is also tourist in which famous Sharm El-Sheikh is located, coming on the agenda from time to time due to armed attacks.

It is possible to assess the activities of the active armed structures which are rendering Sinai into a war zone today in three stages. Until the popular uprisings which toppled Mubarak, armed groups in the region targeted tourist zones along Sinai’s Red Sea coast. As with the attack on Israeli tourists in 2004, several attacks during this period were undertaken by Al-Qaeda. As of this date, armed along the lines of Al-Qaeda began to diversify.

The period in which armed structures in Sinai gained power and could move freely began with the overthrow of Egypt's iron fist. The power vacuum arising in the country with the popular uprisings in January 2011 was mostly reflected in Sinai, and with the shifting of security forces from Sinai to mainland Egypt, the already difficult to control Sinai was left on its own. During this period, armed groups took advantage of the lack of authority by expanding the scope of their attacks. Initially, Al-Qaeda affiliated groups blew up the Al-Arish gas pipeline stretching from Egypt to Israel in February 2011. Al-Qaeda leader Ayman al-Zawahiri’s statement praising the attack was an indication that more events of this kind could continue. Afterwards, large numbers of Egyptian police and soldiers were either taken hostage or killed. As the Egyptian army’s operations in Sinai were ongoing, Al-Qaeda's wing in Egypt announced in August 2011 to have established an Islamic Caliphate in Sinai.

The development which added a new dimension to the conflicts in Sinai has been the military coup that overthrew Morsi. In the current atmosphere of escalating violence, rockets attacks are being organized on military posts and police stations. After the assassination attempt on the Second Army Commander in Sinai, Ahmed Wasfi, during the second week of July, the Al-Arish Airport became the target of rocket attacks. Christian residents and churches found in the Mount Sinai region, an important religious center for Copts, have also become targets.

With allegations that fighters from outside Egypt have been joining Al-Qaida elements in Sinai over the last period, the Bedouin people indigenous to the region are the main source of support to these groups. Despite the good relations between the Bedouin tribal leaders and Egyptian government, the peoples’ bond with bond with the state is considerably weak. The Bedouins who are deprived of social rights such as infrastructure services, schools and hospitals do not even feel connected to the state through the bond of citizenship due to their exposure to discrimination and oppression during the Mubarak era. In addition to the seizure of their lands with their opening up to the tourism sector, the Bedouins who have become detached from the state are left susceptible to all anti-state structures due to not being admitted into the police force or army, not benefiting from business opportunities in the tourism sector, and being exposed to humiliation and pressure. On the other hand, since the pressure applied indiscriminately to the entire Bedouin population based on claims that they support “terrorism” had decreased under Morsi, pro-Morsi demonstrations find a wide base of support in Sinai.

Armed groups in line with Al-Qaeda have also been participating in demonstrations organized in Sinai in support of Morsi. Groups like Ansar al Shariah, Jund Ansar Allah, Al-Tawhid wal Jihad, al-Takfir wal-Hijra, Islamic Jihad, which view the military regime as devoid of religion and criticize—and refuse to acknowledge—the Muslim Brotherhood due to its being integrated into the democratic system, not only send messages defending the Muslim Brotherhood, but even demand the Morsi be reinstated in order for them to end their attacks.

The conflicts’ impact on Egypt and the region

The situation in Sinai not only handicaps the justified struggle of Egyptians seeking democracy, but also takes its share in developments in Hamas-led Gaza. Hamas was held responsible for the murder of 16 Egyptian soldiers killed in the region during the month of Ramadan in 2012. Even if Hamas denies these accusations, the Egyptian army has increased its pressure in the region on the grounds that militants from Gaza are destabilizing Sinai, and has closed the Rafah border crossing following the coup. Last year the Egyptian army destroyed a large quantity of the tunnels, which serve as the only way to break the blockade imposed on Gaza after 2006 and gradually transformed into a large commercial route, on the grounds that the income obtained through them was flowing to Al-Qaeda militants in Sinai. The Gazan people, whose fishing activities have recently also been blocked by the Egyptian Air Force, are beginning to experience a new isolation. On the other hand, on the eve of U.S. Secretary of State Kerry’s Israeli-Palestinian peace talks initiative, Hamas—despite not having staged an attack on Israel for a long time—is being excluded by being accused of supporting violent activities in Sinai. If someone profits from this situation, that appears to be Palestinian Authority leader Mahmoud Abbas. Judging by the claims that Abbas blamed Hamas for Egyptian soldiers’ deaths during his visit to Egypt immediately after the coup to meet with the new administration, it is possible to say that Hamas is among the actors whose exclusion from the game is being sought through the events in Sinai.

Israel, Sinai’s only neighbor excluding the Gaza border to the north, is uneasy with developments in the region. Even if Israel, which is aware of every step taken by Egypt in Sinai as part of its foreign policy based on security paranoia, does not officially express its concerns, it demanded via the White House that Egypt’s operations in the region be executed in a manner coordinated with Israel. According to the Camp David Accords, Egypt—which is not permitted to station troops in Sinai, conducts its land and air operations in the region by informing Israel. It is inevitable that Israel will attempt to compensate for its loss of prestige in the international arena in recent years through a reformulated 'Islamic terror' current based on the Sinai conflict. This situation threatens the relative stability in Palestine, while carrying the risk of a new post-September 11 security paradigm which will gain legitimacy through the Al-Qaeda fear spreading across the general region.

Armed structures in Sinai are attempting to use the atmosphere in Egypt after the military coup for their own interests. The mandate of these armed groups that attacks will end once Morsi is reinstated is not at all convincing given the harsh criticism they had leveled against Morsi and the Muslim Brotherhood after their coming into power through democratic elections in the past year, and their persistence in armed activity during Morsi’s term. The reference to these violence-fed groups alongside civilian resistances which advocate the people’s will will result in the exclusion of the Muslim Brotherhood from the system, while accelerating Arab peoples’ inclination toward armed movements at a time in which their faith in multi-party systems based on election results, as in the case of Egypt, is being weakened. At this juncture the Muslim Brotherhood’s statement regarding Sinai that “Primary among the principles which the Muslim Brotherhood will not forgo is being peaceful” carries even greater value.