Rohingya belongs to Arakan, not to Bengal 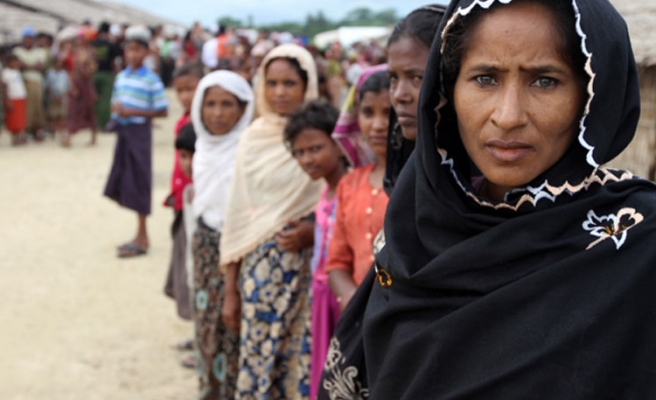 In 1799, Francis Buchanan published a book of historical documents of Rohingya. The Arakan kingdom was gone to the British territory in 1825. They have been facing systematic discrimination and inhumane harassments for many years by Burmese regime.

The UN Secretary-General Ban Ki-moon used the term “Rohingya” during his visit to Nay Pyi Taw, which prompted a strongly worded rebuke from Arakan State Chief Minister U Maung Maung Ohn. In every township of Arakan State, Rakhine racists demonstrated against his usage of Rohingya.

Moreover, Burmese representative to the UN objected to the use of “Rohingya” during discussions over the annual resolution on its human rights situation.

The UN, USA, EU, OIC, Right Groups and other Western countries have accused for decades Burma of breaching the human rights of the Rohingya community in Arakan State. The Burmese government and local authority have not done enough to resolve these allegations. After the 2012 violence in Arakan State, more than 140,000 Rohingya were displaced and have been staying in isolated refugee camps. They have not been allowed to return to their homes.

Every country has its own rules and laws and each individual has their own rights. The UN’s Universal Declaration of Human Rights states that a person is entitled to reveal or announce or express their own ethnicity. Therefore, Rohingya in Arakan State has the right to say their own name. It is their right and if it is forbidden it could be a transgression of human rights.

President Thein Sein said that the Rohingya are not consisted in list of official ethnic groups and are not an ethnic group of Burma. He did not say that there is no Rohingya in Arakan state, Burma. Rohingya has many strong evidences and documentaries having race name ' Rohingya' issued by Burmese government earlier than this conspiracy of masking the whole vulnerable Rohingya community.

Rakhine extremists endanger to boycott if enumerators allowed Rohingya to list themselves as Rohingya.

But, the government had already made agreements with the international community on how to collect census data. As per agreement was that a person had the right to freely state whatever ethnicity they like and this would be noted by the enumerator.

The authorities had to decide whether to break their agreement with the international community or give in to Rakhine concerns and avert a boycott. Ultimately, they regime prefer to the demand of Rakhine people that made 1.5 million Rohingya living in Arakan State were not included in the census. Collecting no Rohingya into Census is also one of the conspiracies of Burmese regime.

The Burmese government is entitled not to recognise those people as Rohingya for its official processes.

But that doesn’t mean it should deny citizenship and the rights that come with it, to those who are eligible. Especially, it needs to take steps to end the use of temporary Identity cards, known as white cards, which it began issuing to the Rohingya community in 1993. Every single Rohingya belongs to Arakan, Burma. So, they are citizen of Arakan, Burma. The fabricated phenomenon to driving out an ethnic community is not constantly lasted in the history of the world.

The government should make sure that the human rights of all Rohingya people in Arakan State are respected. This means scrutinising whether they are eligible for citizenship and if so granting it, and then allowing them the right to live, marry, travel and do business like a normal citizen.

The upper-level government officials and some Rakhine racists have disputed the allegations from the international community, including the UN, about the living conditions of the Rohingya community. The problem will most definitely not be resolved by saying things like, “Don’t use the term ‘Rohingya’,” “You are interfering in our country’s internal affairs,” and “You are breaching our country’s sovereignty.”

It must be recognised that the Rohingya in Arakan State have no power, no rights and no big businesses. They are poor and are not allowed to travel. The Burmese government does not allow Rohigya students to study and acquire education; Medical, Engineering, Business Administration, Laws, and also required basic education.

On the second week of February 2015, a bill was enacted with a clause that would give 'white card' holders Rohingya the right to vote in a proposed referendum on the country's constitution.

After a couple of days, the office of President Thein Sein issued a new statement saying that the white cards would expire at the end of March and cancelled the voting right of Rohingya.

In December 2014, the UN passed a resolution urging Burma to give full citizenship to the Rohingya, many of whom are subject to extreme discrimination.

The anti-Muslim monk Wirathu lambasted the UN’s special rapporteur for human rights in Burma, Yang-hee Lee, in a speech in January 2015 in Rangoon. He called her a “whore” for her word towards Rohingya right. It is clear that Burmese regime uses some racist monks and Rakhine extremists to insult and boycott UN delegations and INGOs who rise voices against Human Right Violation in Burma.

The Burmese regime is a military regime but changed her name to 'Republicofthe Union of Myanmar' as a falsified-reforming of democracy nation to withdraw all the business sanctions against her from various developed countries.

Mohamed Farooq is a Rohingya Electrical and Electronic Engineer lives in Norway. He can be reached at [email protected]