The 'massacre' in Central Africa

One wonders what would have happened if the actors of violence in the Central African Republic were Muslims. Christian Balaka gangs are neither being called terrorists nor religious extremists. On the contrary, by saying anti-Balaka, they are being portrayed as being opposed to violence. 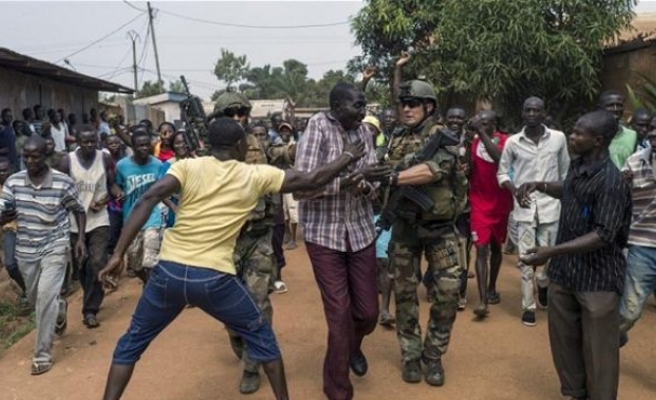 The Central African Republic (CAR) has been in a political, religious and humanitarian crisis lately. All three dimensions of the crisis are growing steadily and the state of the country's affairs are getting complicated. As these three dimensions grow ever more complex, triggering each other mutually, the situation is becoming evermore dangerous.

As its known, in March 2013 in the country's rural areas, 5 armed groups entered the capital Bangui and overthrew the government. In 2012, these armed groups formalised a coalition named Seleka. Comprising predominantly of Muslims, the Seleka movement formalised a transitional government by overthrowing François Bozize’s administration. Seleka brought ex-diplomat to Sudan Michel Dijotodia to the position of head of state and requested the country to go into elections within 18 months.

Michel Dijotodia was the first Muslim to be head of state. According to agreements, Djotodia and Seleka were not to be candidates in the elections. With Djotodia taking duty and Seleka forming a new government, seats were given to both Muslims and Christians. The prime minister's duty was given to the country's well-known lawyer Nicolas Tiangaye, who was the lawyer of Biokasso and Bozize in the past.

After François Bozize's seat was taken by the Seleka, he left the country, first fleeing to Cameroon before taking refuge in Benin. In a short period of time, Bozize gathered his supporters and launched a violent counter-attack. Bozize's supporters then started mass killings in Muslim villages and mosques, targeting Seleka supporters. These gangs were given the name Balaka and they performed all kinds of inhumane acts and killed thousands of people in a short period of time.

The current crisis the country is witnessing was triggered by the latest sequence of events started at the start of December. The Balaka gang increased its attacks on Muslims and on the night of December 5th, former Seleka commanders' homes were raided and executions were carried out. On the night of the killings, 4 important leaders were executed and the remaining Seleka leaders managed to escape before their homes were demolished. The Seleka leaders that managed to escape the kilings took refuge in safer places like mosques and schools.

During this same time the violent attacks gave a good excuse for France to get a decree from the UN Security Council to increase the number of their troops in the country. France assumed the protection of civilians and channeled into the country 1,600 troops. French troops were accompanied by African Union troops. But instead of France's militarry presence reducing the violence, it escalated it even more. Due to the Balaka gang gaining power with the presence of French troops, they carried out attacks on Muslims, causing further bloodshed.

To reduce the violence France implemented a disarmmnet policy. In the name of disarming Seleka members, Muslim neighbourhoods were raided and had any weapons and sharp tools collected following extensive searches. This one-sided disarmment made the Muslims weak and gave their opponents, the Balaka gang, more encouragement. France lost its neutrality towards the Muslim community, which started to critisize France, showing their reaction with street protests. They warned France that their bias was putting Muslims in danger.

The Christian Balaka gang's escalation of violence towards Muslims gave this seemingly political crisis a religious dimension. People that fled the violence took refuge in camps, mosques, schools, madrassas and churches. This situation polarized the Muslims and Christians, bringing these two religions to a dangerous area. The humanitarian crisis in the country expanded over time. Those who found the opportunity fled the country and those who couldn't looked for a safe place to take refuge. In a country with a population of 4.5 million, it is estimated that more than 600,000 people fled their homes.

France's millitary presence changed the balances in the country while counteracting the government. In the shadow of military intervention, the government has come to a standstill with banks, schools and businesses in the country closed for a long period of time. While public institutions are unworkable, the government is unable o pay civil servants salaries. The streets are filled with military vehicles and checkpoints. Free movement in the streets is allmost impossible.

Clearly it is not only France lost their neutrality in Central Africa. Western media organisations are also far from being objective in their news reportings. It is hard to understand the distortions made for those that are not close to the country. It is useful to give some examples for one to explain this point.

Firstly, the distortion in naming the actors stands out immediately. Local people know the gangs as “Balaka” or “Palali, whereas western media is calling them “anti-Balaka”. These gangs, that give rise to violence, are being portrayed as anti-machete gangs, and thus, the actors are being mispositioned. This discourse in the country brings to focus Seleka as being the violent, evil force even though after March, the Seleka group was liquidised.

Another distortion being portrayed in the media is the showing of Muslims living in CAR as a foreign entity. The message is given that the Christians are the country's true owners by portraying the Muslims as a foreign minority of people from places like Chad, Sudan and neighbouring countries. However, this view is also quite problematic as Islam has been a dominant religion in the country for a long period under Muslim sultants before the colonisation and Christianization of the country by the French forces and missionaries.

The other distortation is the country's leader frequently being portrayed as a Muslim, and what is implied is that a country which is mainly Christian is governed by a Muslim leader, when this is far from what is the truth. A mixed government is at work in the country. The number of Christian ministers is more than the number of Muslim ministers.

Western media is ignoring mosques full of bodies. While Muslims can’t even find places to bury their dead, they are being shown as the cause of violence in the country. Though ne wonders what would have happened if the actors of violence in the Central African Republic were Muslims. Christian Balaka gangs are neither being called terrorists nor religious extremists. On the contrary, by saying anti-Balaka, they are being portrayed as being opposed to violence.

Muslims and Christians in CAR once lived in harmony and CAR was far from violent outbreaks, but now things have reached a dangerous point. What is in front of our eyes is reminiscent of the Rwanda massacres. The extremist religious-terrorist-gang Balaka have declared war on all Muslim elements (including Muslim soldiers in peacekeeping forces), as if they have vowed to eradicate all Muslims by adopting any form of inhumane violence necessary to do so.

By France undermining the current government, the country's commercial life, education and social life is at a standstill. Western media is in an effort to ignore the situation of the Muslim community by processing the thesis that Seleka rebels are the ones committing the violence.

Unfortunately no one apart from the west is interested in what happens in the country. Not a single soul from the Muslim world is speaking out. This situation is leading the Muslims to feel abandoned and alone. On the other hand, the Christian terrorist organization Balaka are being armed and encouraged by others. Thus a dirty game is preparing the grounds for the two religions to come into conflict. If the incidents are not contained, a huge religious war is at the door.

This is an excellent article. I did a Critical Discourse Analysis of a Western media Newspaper on its reporting on the crisis, and the coverage by the Newspaper on Muslims is appalling. The people of CAR deserve to have their ordeal reported without Western media bias which gives the impression the conflict is between Us and Them, a 'clash of civilizations'. Thank you for writing this.