What did Putin promise?

Netanyahu's visit to Putin is seen as a game changer which effectively signals a new equilibrium in the Middle East. His visit only begs the question: What did Putin promise? 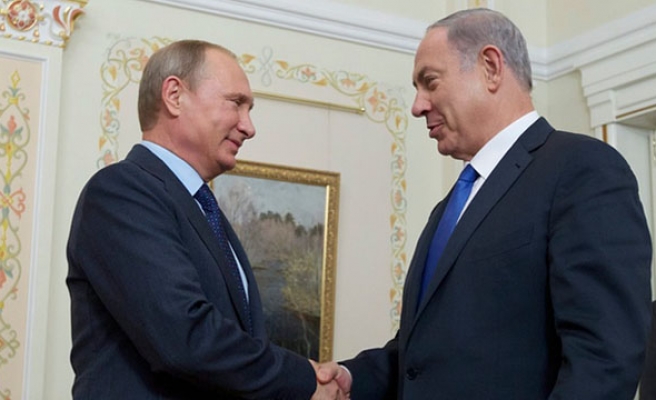 The two actors who were successful in not coming across each other during the Syria crisis have finally met.

Israeli Prime Minister Netanyahu has visited Moscow and has met Putin, expressing his concerns about Russia providing military support to the Syrian Baath regime. A short while after the crisis in Syria turned in to be a civil war, the struggle gained a new dimension. The conditions for a micro-sized cold war were explicitly formed. This meant that Russia would once again make a geostrategic move and stand against the U.S. and allies as a military power.

While Russia provided the military logistics for the Baath regime, Iran took to the field with its military identity by way of Hezbollah. The U.S. remained standing with the support of the Gulf countries and Saudi Arabia, as they only supported their allies on the grounds of diplomacy. The psychological effect of the support given to the opposition was more important for Turkey than the material value.

However, it is clear that Russia coming against the U.S. and its allies on the field is a rehearsal of a micro Cold War.Russia showing itself more often in the region while Iran has just signed a nuclear agreement and is standing close to a diplomatic settlement raises new questions.

New alliances have been formed between ISIL, which has become effective in the region, and powers which support the opposition. It is certain that America has always wanted to see a moderate opposition rather than an Islamist opposition; therefore, the U.S. has always steered clear of giving support that will bring results. With ISIL becoming active in the region, the U.S. virtually said, “Leave Assad and look at ISIL”; thus it isn't surprising that they preferred the secular Baath regime over the opposition.

Russia forming a new military base in Syria, and the rumors that the combat troops are in the field right at this point in time, indicate that a new equation is being formed. Since Turkey has been occupied with its own internal politics, things happening next door have fallen off the agenda. Russia's last move, especially after the Ukraine crisis, means that the cold war equilibrium has been moved to the Middle East. Ukraine is the revenge of a possible agreement.

A cold war equation in the Middle East means that there is a power distribution in polarization with Israel in the center. Up until today, despite being directly related, Israel has been enjoying a so-called impartial stance on the Syrian crisis issue, claiming it as an internal issue of the Arab world.

Yet, Russia explicitly showing its military existence in the region has led to Israel visiting Moscow, and thus, this should be read in the light of the new developments in the region...

As Israel realized that Russia's military support for Syria would be a threat, Netanyahu went to meet Putin. In the conditions of a cold war, while America extended unlimited support to Israel, the Soviet supported the Palestinian resistance and gave military support to Syria, thus this concern may seem reasonable. Yet, Israel knows well that the Soviets' support to Syria's military is not a threat for them. Even though Syria is the only Arab country that hasn't signed a peace agreement with Israel.

It shouldn't be forgotten that despite the opposite image the Soviets gave throughout history, they were actually one of the global powers that assured the security of Israel. Although at times, they come face to face with the U.S., this is never the case when Israel is the subject. When you look at the big picture, you can see that while America supports Israel with its military forces, the Soviets have always provided vitally important demographic support. In other words, during the cold war, Israel has been supported not only by the West, but also by the Soviets; Military support from America, demographic support from the Soviets.

It is impossible for Netanyahu not to be aware of this lasting equilibrium. Still, Netanyahu's visit to Moscow can't be related to his concern about his country only. According to Reuters, Putin assured Netanyahu that he shouldn't be concerned about Russia supporting the Baath regime. Furthermore, the discourse indicates that; the two sides have negotiated on a mechanism that will guarantee Russian soldiers will not have to face the Israeli forces.

At this point, how should Iran's signals for backing away after nuclear negotiations and Russia virtually stepping in be understood? We shouldn't be surprised if Iran revises its Syria policy as part of its nuclear negotiations. Within this scope, there are Arab analysts that see Russia increasing its existence in Syria as a move against Iran. For example, Ibrahim el Hamidi's argument (from el-Hayat) that Russia is actually protecting Assad from Iran more than the oppositions, should be though about within the scope of Iran's position after the nuclear agreement.

With regards to Israel; even if it is assumed that Israel went to Moscow to get security guarantees, it is probable that Russia's position in Syria with and without Assad was on the agenda too.

The new power balances that have evolved in Syria are more about the micro cold war equation, not Syria. And it isn't possible to see this independent of the Ukrainian crisis. Moreover, the negotiations have gone beyond whether Assad will go or not, and instead are about how the new Middle East will be shaped. This picture has images of ISIL, the Syrian “moderate opposition” the Iraqi Sunni's position, the Shias, Turkey's strategic concerns and the roles of the Kurds in the new Middle East and many other conflicting actors.

The only certain thing in this picture is; no matter how the equation is formed, Israel position has been guaranteed.