Why does the Pope forgive? 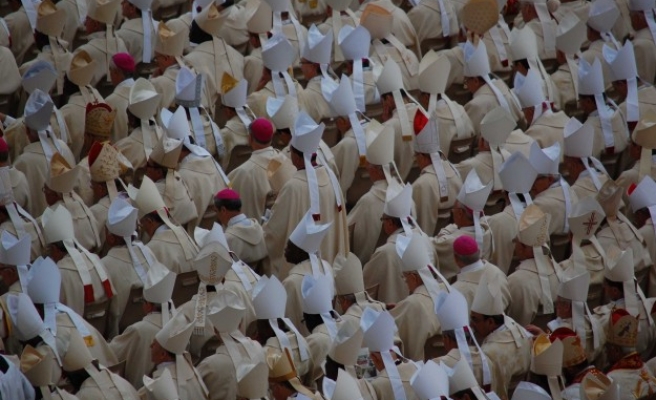 Catholic Church is still known as Western Christianity's most rooted, effective and extensive establishment. Even though the Vatican had withdrawn within country borders, it's still a widespread and organized church on the world scale…. Despite the fact that the difference between the Catholics, Orthodox and Protestants is regarded as a sect differentiation by us, there is a differentiation that exceeds Islam's sect description. They are regarded as different religions within Christianity.

After losing its power to direct the politics, in other words, since the historical fraction that resulted with the church withdrew itself to its own area as a government, the Catholic Church has constantly been losing locality. By basing on the “direct contact with the holy script, by disintermediating the 'church'” principle, Protestantism caused a theological earthquake. Following the formation of nation-states, the government-church differentiation became definite. Along with losing its religious influence, it also lost its political influence. The description of laicism amounts to distancing the church from the government instead of purifying the government from the religion in the West. If not, the traditional codes and rules shaped by the religion will continue its validity in the law system and state affairs.

The Church, which rapidly withdrew from life intellectually and communally, continued its development in imperial projects under the colonial countries. Especially after its political influence was shattered, it started acting as the exploration leg of the colonial expansionism and thus supported by political authorities. In particular, the secular French imperial project is an important model that should be approached in this sense. The French, who struggled against the church in domestic politics and oppressed the influence of the church, also linked arms for expansionist policies outside.

How could a Church, which had been distanced from politics and has no sanction power on the matter of shaping politics and community, stand against the changes and demands of the modern world?

What can a Church, which gives sympathetic messages in the media and whose moral scandals are cloaked, say to a modern person?

What is the message of Catholicism, which is a religion against the tendency to distance from religion in Western communities that are experiencing terrible upheavals in matters like scientific revolutions, enlightenment idea, industrialization and class movements?

Time to time, we hear news of the leader of the Catholic world, Pope, when he removes a ban, an act or forgives some sins. The Pope presents itself in the media with a smile that feels like it had been borrowed. It became a tradition for the newly voted pope to announce that following his decision, a certain “act”, which is regarded as a ban by the church, is no longer regarded as a sin. Even the non-Christian world observes these decision, which is turning into a media show and concerns the theology in the essence, with curiosity.

An important portion of these decision are rules that are accepted as moral standards for traditional communities and many religions. Else, they are implementations that are religious principles unique to Christianity, Catholicism in private, and are stern in the present time.

There might be some that are willing to interpret it as an answer of a religion to the necessities of the era based on this. Thus, the rules, which are thought to be frazzled in the terms of lifestyle, behavior norms and moral principles, are renewed. The Church, which used to designate absolute rules on behalf of the God, regards them invalid afterwards.

My intention is not to start a theological discussion related with how the verdicts are imposed in the Catholic and Protestant churches.

The matter I want to point at based on papacy is the fact that a religion let go of itself to the waves it cannot resist instead of transforming the people, warning them against deviations, point at the reality and be persistent in that.

The Catholic Church is constantly making concessions to itself and preferring to stand upright by adapting to developing communal demands, modern world's behavior norms and economic constraining. Thus, it's providing the individuals to think that they are being religious by regarding themselves as Christians, without having any difficulties in the daily life, and making no concessions to relation styles.

As for Protestantism, it's opening a wider field on this matter. The point in question is a Christianity that leaves the door open to everyone's religion understanding of people as a necessity of a method. Besides, even in politics, it's pursuing a power sharing distinctly from papacy. For example, Queen of England is also the head of the British Church. In other words, the political and religious power are both gathered in one.

Is it Catholicism or Protestantism, where everyone makes a verdict out of the religion as they see fit and where a new sect becomes evident every day, which is trying to stand straight by constantly capitulating?

The biggest advantage of the Muslims against this is to have the resources authentically and the fact that the verdicts of the religion are alive together with all the reference systems.

The desired operation against Muslimism is the protestanization of the religion. Thus, the religious reference system will be deactivated and a religion, which is invented by anyone in their own way, will be created. We know that the modernist Republic personnel are attempting this politically.

Christianity, Islam, the holy script and tradition are not coinciding situations in the sense of protestanization. However, the Papacy's attempt to stand upright by making compensations is creating a religion, which changes itself according to the developments rather than showing the true path to the community and people. What could be the pledge of this religion to the community? The transfiguration experienced by Christianity can be regarded as a lesson for the Muslims.