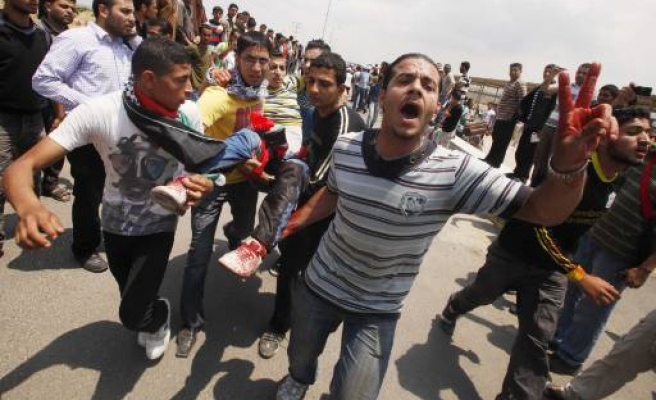 Two separate incidents in the West Bank and Gaza left up to 49 Palestinians injured after Israeli forces fired on them with both rubber bullets and live ammunition.

At least 35 Palestinian were injured by Israeli gunfire during clashes between Palestinian youths and Israeli troops in the Old City of Al-Khalil (Hebron) in the southern West Bank, eyewitnesses said Friday.

Five Palestinians were injured by live ammunition while the remaining 30 were struck by rubber bullets during clashes that broke out in the city's Bab Al-Zawiyeh neighborhood, witnesses said.

Clashes erupted when Israeli army troops blocked a protest march staged by the "Palestinian Youth against Settlement" campaign and the Committee for the Defense of Hebron to mark the 20th anniversary of the Ibrahimi Mosque massacre.

Friday's march, attended by hundreds of Palestinians, set out from the Shiekh Ali Buqa Mosque to the eastern entrance of Shuhadaa Street, which has been closed by Israeli authorities since the massacre.

"Israeli soldiers fired a barrage of stun grenades and teargas canisters at demonstrators as the latter approached the Old City entrance," Rajeh Abu Agamiyeh, a member of the Committee for the Defense of Al-Khalil, told Anadolu Agency.

In a statement, the Popular Front for the Liberation of Palestine confirmed that Majida al-Masri, a member of the front's political bureau, had suffered temporary asphyxiation due to Israeli teargas.

Al-Khalil is home to roughly 160,000 Palestinian Muslims and about 500 Jewish settlers. The latter live in several Jewish-only enclaves that are heavily guarded by Israeli troops.

Meanwhile, another fourteen Palestinians were injured by Israeli troops near the border between the Gaza Strip and Israel on Friday, the Gaza Health Ministry has said.

A number of Palestinian activists staged a Friday demonstration east of Jabalia in the northern Gaza Strip to denounce the ongoing Israeli occupation of Palestinian land and continued violations by Israeli troops.

The rest had suffered slight to moderate gunshot injuries, he said.

In late 2012, an Egypt-brokered ceasefire between Israel and Palestinian resistance faction Hamas – which has governed the Gaza Strip since 2007 – ended eight days of cross-border fighting.