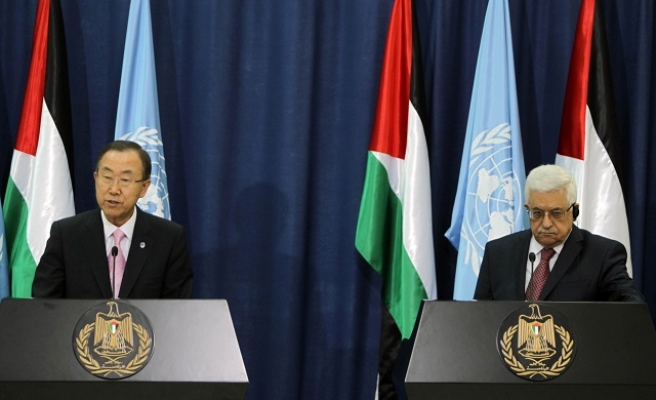 Palestinian President Mahmoud Abbas on Wednesday met with UN Secretary-General Ban Ki-moon in Ramallah, whose visit is ostensibly aimed at ending weeks of violence in the region that has left 53 Palestinians and 10 Israelis dead.

Following a meeting with Ban, Abbas asserted that the Palestinian Authority (PA) had the right to use all legitimate means to protect the Palestinian people, who, he said, remained subject to persistent Israeli aggression.

"We have lost the ability to protect ourselves," he said. "We have no other choice but to seek international protection."

"We hope the UN will help us protect our people from the [Jewish] settlers’ terrorism and Israeli collective punishment," he added.

Abbas went to say that the PA remained committed to achieving peace with the self-proclaimed Jewish state based on international agreements.

"Israel must fulfill its obligations in accordance with the agreements signed; otherwise, we will not be able to continue alone," he said.

Abbas warned, however, that repeated Israeli violations against Islamic and Christian holy places in East Jerusalem -- especially the Al-Aqsa Mosque -- would open the door to potential religious conflict.

Ban, for his part, urged the international community to fulfill its commitments to the Palestinians and take a stand against violence, incitement and hate speech.

"There is no justification for the killing," he said after meeting Abbas. "We will continue to support all efforts to create the conditions to make meaningful negotiations possible."

He added: "The storming of the holy places [by Jewish extremists and Israeli security forces] led to the current wave of violence. No one can continue with the current situation between Israel and the Palestinians."

"Ban Ki-moon's remarks during his visit to the region equate murderous [Jewish] settlers with the Palestinian people, who are merely defending themselves," Hamas spokesman Sami Abu Zuhri said in a statement.

"These statements are biased towards the Israeli occupation and contravene international law," he added.

He went on to urge the Palestinian people to continue their "intifada" -- "uprising" in Arabic -- and to not be fooled by what he described as "plots aimed at ending it".

On Wednesday, two more Palestinians were killed by Israeli security forces in the Israeli-occupied West Bank, according to the Palestinian Health Ministry.

Motaz Qassem, 22, was killed near the Jewish-only Adam Settlement near the West Bank city of Ramallah after allegedly stabbing an Israeli soldier.

Yet another Palestinian, Hashem al-Izzah, 45, reportedly suffocated to death during clashes near the West Bank city of Hebron.

According to the Palestinian Health Ministry, Wednesday’s deaths bring the total number of Palestinians killed by Israeli forces this month to 53, including 11 children and one woman.

Over the same period, at least 1,900 Palestinians have been injured by Israeli gunfire, while thousands of others have suffered temporary asphyxia as a result of the excessive use of teargas by the Israeli authorities, the ministry said.