Abbas said the Palestinians faced pressure from Israel and its allies to prevent them from seeing through their planned diplomatic action at September's General Assembly meeting in New York. 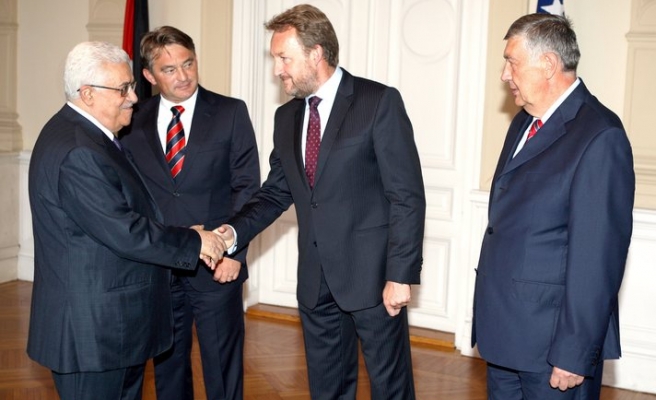 President Mahmoud Abbas on Monday appealed for Arab financial support to help the Palestinians deal with pressures and threats from Israel and its allies which he said were a risk to his plan to demand U.N. approval for statehood in September.

The Palestinian Authority faces a financial crisis which forced it to cut wages by half in July. Policymakers have identified a shortfall in Arab aid as the main cause.

The crisis has highlighted the financial fragility of the aid-dependent Palestinian Authority as Abbas embarks on a diplomatic offensive opposed by the United States, another of the Palestinians' main donors and also Israel's main backer.

Writing in the Saudi newspaper Al-Watan, Abbas said the Palestinians faced pressure from Israel and its allies to prevent them from seeing through their planned diplomatic action at September's General Assembly meeting in New York.

"We have not enjoyed the Arab political and financial support needed to get through this delicate period. These pressures and threats will continue and reduce the chances of success," Abbas wrote.

Despite the pressure, he said he was committed to seeing through the diplomatic efforts.

Abbas' plan is to apply for full U.N. membership for the state of Palestine in the West Bank, the Gaza Strip and East Jerusalem, territories occupied by Israel.

The United States is expected to use its veto power in the Security Council to block the move.

Facing the prospect of a U.S. veto, the Palestinians are also planning to seek a General Assembly resolution upgrading their U.N. status to that of a non-member state. Not requiring Security Council approval, that is expected to pass.

Abbas said reasons for the move included the fact that bilateral negotiations have reached a dead end. He also said it would improve the chances of serious negotiations.

"However their support now has a special quality in supporting our diplomatic move which will help in bringing peace closer," he wrote.

The Palestinian Authority pays salaries to 150,000 people in the West Bank and the Gaza Strip and monthly allowances to another 75,000 people.

Though it paid full wages in August, the PA warned its financial troubles were not over.

July's pay cut was the second salary crisis faced by the PA this year. In May, the PA was unable to pay salaries on time for the first time since 2007 because of an Israeli haltinf of the transfer of taxes it collects on the PA's behalf as an occupying power.