Aborigines will save Gaza!

In the region where all the ethnic, religious, sectarian differences are provocations against each other, who would seriously take Gaza into their account? 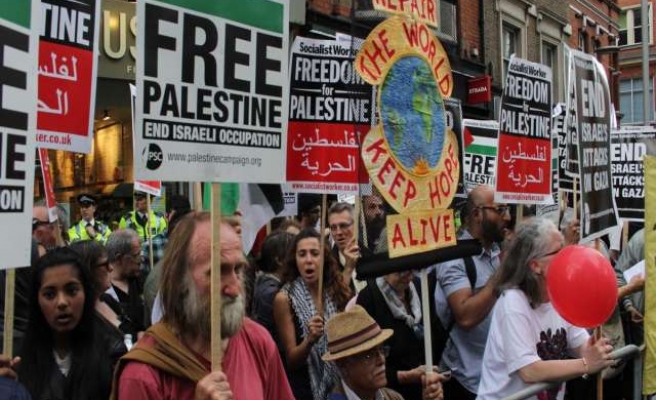 Israel was never that loosely free in its actions. There is a cliché legend that Israel always appeals whenever it wants to legitimize its oppression in the western public. Accordingly, the Israelis are desperate people in a sea of Arabs, a sea that desires to destroy them. So there is a state – Israel – which is a safe haven for them. On a large Middle-Eastern map one can see a tiny Israel is located there. It is impossible not to show pity!

It is debatable whether Israel's borders are all surrounded by enemies or not and whether this claim has any corresponding reality. However, it is an undebatable fact that Israel, like a bloody knife, stabs the heart of the Middle East and is shedding blood continuously in the lands ıt occupies.

Indeed, Israel is freely bombing Gaza and the death toll is increasing every day. Despite all this, there is a mortal silence, and allegedly, 'neighboring countries' are looking for its destruction. With the leadership of Saddam, Mubarak or Abdullah, the neighboring countries had no power to mobilize for war when Palestinians were being bombarded and Gaza was being ruined.

Nevertheless, at times they cut the relationships and attempted to convince their people to protest against Israel. When some severe condemnations were made by the US, they would begin paying attention to the calls after Israel finished the job.

This time the situation is altogether different. After its engaged peace process failed and collapsed, the US gave its clear support to Israel by announcing that 'Israel's self defense right has always existed'. Even so, prior to the Gaza attacks that were launched in 2012 with the operation name 'the pillar of cloud', which the US opposed, it turned out later that the US had conducted military drills for a test attack.

After the kidnapping and killing of three young Israeli men, Israel started to arrest every Palestinian on sight and also burnt a young Palestinian boy to death, which escalated the tension. This gave the opportunity to Israel to attack. The tension was quite useful for Israel to undermine the Hamas and Fatah alliance after they agreed terms on a unified technocrat government project.

The international conjecture is convenient for the expectations of Israel. The image of the 'radical Islamist terrorist' in Iraq and Syria, which is imported into the West, is identified with Hamas. This gave the opportunity to Israel to act freely in its military action by de facto.

Israel usually knew how to use the discourse of 'the Islamist terrorist' quite well through its operations of perception .

It legitimized the situation through the perception that a greater danger of terror awaits. Even so, Israel established the discourse of struggle in 'destroying the imminent Islamist threat in the region for the West'.

When the international conjecture was such, Israel became more favorable on the field. First, if we check the situation from the view of intra-Palestinian relationships, the only positive development was the Hamas-Fatah collaboration. However, even this was ruined before its realization. On the other hand, Hamas was completely marginalized, which represented the symbol of the resistance. After that, the financial, logistic and diplomatic support coming from Egypt, the Gulf countries and Iran were completely suspended. Turkey got preoccupied with its own domestic issues and was busy with the crisis in its south-east.

The essential problem has been the condition of the Arabian Sea and the Middle East surrounding Israel. The balance of which both the Israel and Arab countries were pumping threat perception against each other, turning the Arab countries into an empire of terror . At least, certain ritual reactions could have been implemented in the given circumstances. Perhaps it might not have been effective to the point, but it would have made a memorable attempt and a latent support.

Today, we are heading for a time in the Middle East where the region has divided into many pieces and is turning into a potential sectarian battlefield through a bloody vendetta. Moreover, this specific sectarian clash, namely the Sunni-Shiite conflict, has advanced in the entire region in full scale.

The conflict between Assad and the opposition forces did not only do away with the most serious military threat to Israel (even though this force has never been used). The contestation between the regime and opposition forces, through its development into a civil war, deteriorated the situation with a sectarian dimension.

Iran's clear and active role in taking a side on the Syria matter and the support by Hezbollah led the conflict into an interstate and sectarian division. Having once knocked out Israel during the Lebanon attacks, today Hezbollah has no time to deal with Gaza because it is preoccupied with its Syria agenda.

Saudi Arabia and other gulf countries incite the agency-war in Syria are also preoccupied with greater dangers than Israel. In the name of their representative 'synthetic salafism' movement and their extensions, which excommunicates Shiites, they are busy engaging in war against Muslims with different religious mindsets, traditions, symbols and cultures.

Turkey is busy with the Neo-Unionist discourse's effects on the field, where it took on the role for adjusting the order in the Middle East. Let alone a confrontation on the diplomatic level, even the media insensitivity, such as the incident of Mavi Marmara tragedy, portrays the odd indifference in this country.

In the region where all the ethnic, religious, sectarian differences are provocations against each other, or states are not active in de facto terms except in officially existing, including the unknown agents or states and organizations functioning as existing states, who would seriously take Gaza into their account?