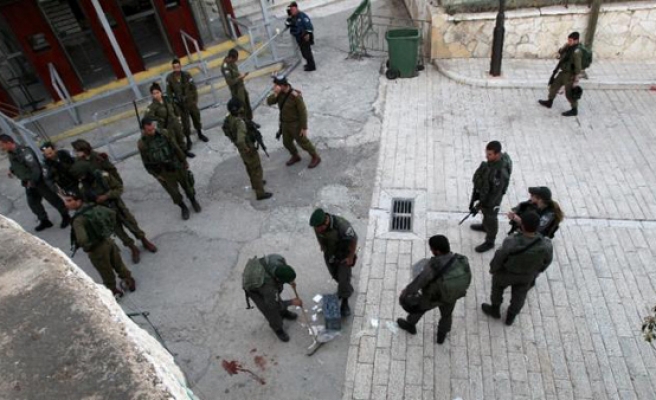 At least two Israelis and a suspected Palestinian assailant have been killed in Jerusalem on Saturday, police said. Consequently, Al-Quds is under lock down after Zionist settlers were killed. Israeli soldiers have attacked Muslims in Al Aqsa mosque and have kicked them out.

Police spokesperson Micky Rosenfeld said the Palestinian was shot after the knife attack in Jerusalem's old city which also left at least two others injured, including a 2-year-old baby.

"Two people murdered in terrorist attack in old city, Jerusalem by Palestinian this evening. Terrorist was shot and killed at scene," tweeted Rosenfeld.

The attack comes at a time of heightened tension between Palestinians and Israelis. On Thursday, a Zionist couple were killed when their car was shot at near Jewish settlements in the West Bank, leading to reprisal attacks by Israeli settlers who set fire to Palestinian vehicles and land.

Jerusalem's old city has also been the site of frequent clashes between Palestinians and Israeli police since Sep. 13 because of heavy restrictions on entry to the revered Al-Aqsa mosque compound during a series of Jewish holidays.

Palestinians see the restrictions as an infringement on their right to worship at the site, considered the third holiest in Islam.

Jewish visitors are banned from praying at the site, which they also consider holy, but hardline groups have frequently forced their way onto the Al-Aqsa compound, leading to clashes with security forces.

With the rising tensions, both Palestinian and Israeli authorities have recently attempted to highlight how many have been killed this year.

The Palestinian Liberation Organization, which governs the West Bank, tweeted on Saturday that 35 Palestinians had been killed and 750 injured by security forces or Israeli settlers since January.

An Israeli military blog post on Thursday also highlighted that, in the same period, three civilians had been killed and 24 had been injured before this week.