In its report, the London-based group said that it has evidence that Israeli attacks on four buildings in Gaza were in contravention of international humanitarian law 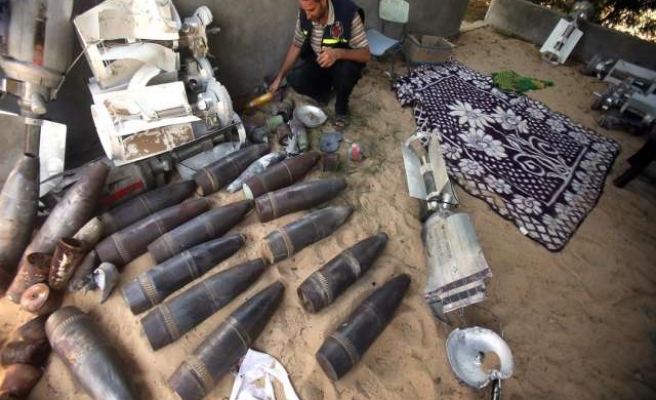 World Bulletin/News Desk
An international rights watchdog has accused Israel of committing "war crimes" during its 51-day offensive against the Gaza Strip this summer, and called for an independent probe into airstrikes that targeted buildings in the embattled enclave.

In its report dubbed 'Nothing is immune: Israel’s destruction of landmark buildings in Gaza,' the London-based Amnesty International said that it has evidence that Israeli attacks on four multi-story buildings were in contravention of international humanitarian law.

"All the evidence we have shows this large-scale destruction was carried out deliberately and with no military justification," Philip Luther, Director of the Middle East and North Africa Program at Amnesty International, was quoted by the watchdog's website as saying.

"Both the facts on the ground and statements made by Israeli military spokespeople at the time indicate that the attacks were a collective punishment against the people of Gaza and were designed to destroy their already precarious livelihoods."

In July and August, Israel carried out an offensive on the Gaza Strip with the stated aim of halting rocket fire from the blockaded coastal enclave.

Over the course of the 51-day onslaught, more than 2,160 Palestinians were killed – mostly civilians – and some 11,000 injured.

During the offensive, 15,671 housing units were damaged across the coastal enclave, including 2,276 that were totally destroyed, according to official Palestinian figures.

The report highlighted Israeli attacks on four multi-story buildings during the last four days of the offensive, saying that although the Israeli military warned their residents to leave before imminent airstrikes, scores of people from nearby buildings were injured.

"Hundreds of people were devastated to lose their homes, businesses and belongings. In all four cases, panicked residents hurried to evacuate the buildings and in most cases, were unable to salvage their belongings, including important documents, jewelry and savings," the report said.

The release said that while Israel suggested that two of the destroyed buildings used by Palestinian groups, the Israeli authorities have provided no information as to why they destroyed the four entire buildings.

"Even if the Israeli authorities had good reason to believe that a part of a building was being used for military purposes, they had an obligation to choose means and methods of attack that would minimize harm to civilians and their property," Luther said.

"The Israeli army have previously conducted air strikes on specific apartments in high-rise buildings without their complete destruction."

The group asserted that it sent the findings of its report to the Israeli authorities for explanations, but the only response came from the State Comptroller, an ombudsman role, who "simply described the focus of his inquiry into" the Gaza operation.

"No one from the authorities who could have actually addressed the questions about these attacks responded," it asserted.

The group also said it had "documented and consistently condemned" violations of international humanitarian law committed by both Israel, Hamas and Palestinian groups during the conflict, noting that it is working on another report that would focus on alleged violations by Hamas.

It also called for the fact-finding commission set up the United Nations to be allowed to conduct its investigation into the offensive, and called on the Israeli authorities to lift their block on Amnesty International and other human rights organizations entering Gaza.

"War crimes must be independently and impartially investigated and those responsible should be brought to justice in fair trials. Those whose homes and livelihoods have been unlawfully destroyed deserve justice and full reparation," Philip Luther asserted.

Hamas spokesman Sami Abu Zuhri told The Anadolu Agency that "It provided additional evidence that would help convict Israel and prosecute its leaders in international courts."

Abu Zuhri asserted that the Palestinians should join international institutions, including the International Criminal Court, to "bring Israel to account for its crimes."