The protesters, who do not appear to belong to any political faction, called for a fresh rally on Thursday, hoping their grass-root movement, which first took to the streets at the weekend, will gather momentum. 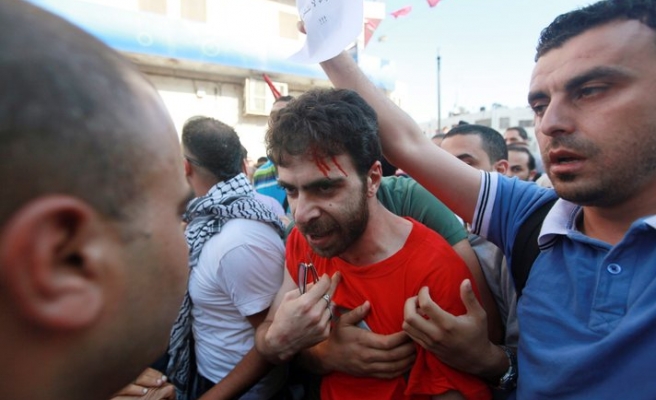 Hundreds of demonstrators marched on the offices of Palestinian President Mahmoud Abbas on Tuesday to protest against diplomatic contacts with Israel and to denounce police violence at a previous rally.

Chanting for an end to the Oslo accords, the flag-waving crowd cut through Ramallah's crammed city centre under the watchful eye of scores of plainclothes security officers.

Heavy handed security forces intervened on Sunday to prevent a smaller group of protesters from reaching Abbas's headquarters in the occupied West Bank, and beat some journalists who tried to cover the event.

But a government source said police were under orders on Tuesday to allow the protesters to take their message to the gleaming stone walls of Abbas's compound, which is also the burial place of previous Palestinian president, Yasser Arafat.

"The streets are open to us today, and that's the result of a political decision. They realise the violence before made them look bad," said Ali Nakhle, a student who joined approximately 400 other, mainly youthful protesters in downtown Ramallah.

While there were no slogans directed specifically against Abbas himself, the protesters were scathing about a recent announcement that the Palestinian president was ready to meet Israeli Vice Premier Shaul Mofaz.

The planned encounter would have been the highest-level meeting between the two sides since direct peace talks broke down in 2010. However, it was abruptly called off at the weekend in apparent response to Palestinian public opinion.

"We want your head Mofaz," the crowds chanted on Tuesday, adding: "The people want the fall of Oslo," adapting a common refrain against the ruling elites in countless Arab Spring protests over the past 18 months.

The 1993 Oslo Accords gave the Palestinians limited self-rule in the occupied territories, and set out guidelines for future peace talks to end the Middle East conflict.

However, a lasting deal has proved elusive and the latest round of talks collapsed two years ago in a dispute over continued Jewish settlement building in the occupied West Bank.

The protesters, who do not appear to belong to any political faction, called for a fresh rally on Thursday, hoping their grass-root movement, which first took to the streets at the weekend, will gather momentum.

The demonstrations have come at a particularly delicate moment for Abbas's Palestinian Authority, which is facing a severe cash crisis because of a failure by some donor states, particularly in the Gulf, to hand over promised funds.

Finance Minister Nabil Kassis told reporters on Tuesday that the government could not pay its workers this month because the coffers were empty.