Fatah canceled a memorial rally scheduled in the Gaza Strip on Tuesday for the 10-year anniversary of Yasser Arafat's death, blaming Hamas on a series of bombings targeting homes of Fatah leaders in the enclave 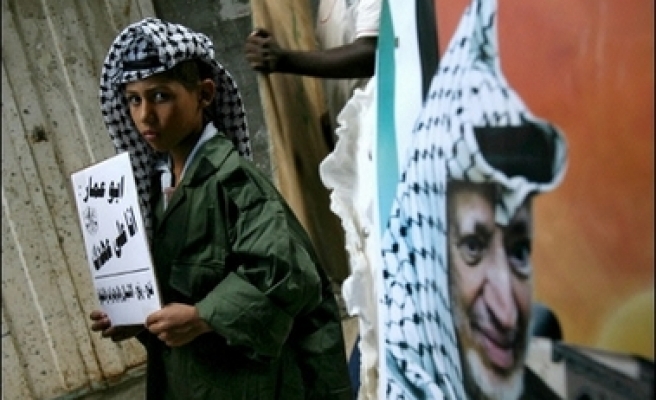 As Palestinians and Israelis appear deadlocked in a conflict that shows no end in sight, the shadow of Yasser Arafat looms as a reminder of lost opportunities on the eve of the 10-year anniversary of his death.

Arafat was probably the only Palestinian leader with the moral, and actual authority to end the conflict, claims Israeli academic Itamar Radai.

"Since his [death], the Israeli authorities felt indeed that the possibility of arriving at a solution was slimmer, even though [current Palestinian president Mahmoud ] Abbas is much more moderate than Arafat was," says Radai, director of the Konrad Adenauer Program for Jewish-Arab Cooperation at the Moshe Dayan Center for Middle East and African Studies at Tel Aviv University.

The iconic Palestinian leader’s death on November 11, 2004, which is still being investigated as doubts over a possible poisoning linger, brought his number-two Mahmoud Abbas to the limelight but he has thus far failed to lead a unified Palestinian front to talks with Israel.

Indeed, members of his Fatah movement were ousted from Gaza in 2007 by the more religion-oriented group, Hamas.

In the latest incident symbolic of the rift among Palestinian factions, Fatah decided to cancel a memorial rally scheduled in the Gaza Strip on Tuesday for Arafat, blaming Hamas on a series of bombings targeting homes of Fatah leaders in the enclave.

In contrast, the charismatic Arafat’s authority reached all groups, from Gaza to the West Bank.

Arafat was "the leader of his era" and "the most distinctive person of the Palestinian movement,” says Ceyhun Cicekci, researcher and specialist in Israeli politics and security issues at Canakkale Onsekiz Mart University, in western Turkey.

In effect, Arafat almost single-handedly brought the plight of the Palestinians to the world stage.

Cicekci adds, however, that he had already lost popularity by the time he died because of his wrong strategic decisions, namely his role in the Oslo peace accords.

In September 1993, Prime Minister of Israel, Yitzhak Rabin, and Palestine Liberation Organization (PLO) leader Arafat agreed on a peace process at the White House in the United States, which recognized a Palestinian Authority and was considered the way to a two-state solution.

"That Arafat invested all his political authority in the Oslo process, which was a failure indeed, made him lose reputation in the eye of Palestinians," says Cicekci.

"He is admired and loved by the Palestinians as the father of their nation and their national movement (...) However, Arafat failed to achieve his main goal, a Palestinian state," Radai from Tel Aviv University has told AA.

Compared with Arafat’s era, the Palestinian Authority and the PLO under Abbas took a much more moderate stance in the conflict with Israel, he adds.

"Unlike Arafat, Abbas made it clear in a series of announcements to his people that he rejects any form of violence, that violence against Israel and Israelis would be against Palestinian interests, and that the only way to settle down the Palestinian-Israeli conflict would be through negotiations," says Radai.

A decade following Arafat's death, the Israeli-Palestinian conflict, still continues as evidenced with last Wednesday's incidents when the Al-Aqsa complex was stormed by a group of Jewish settlers and Israeli security forces.