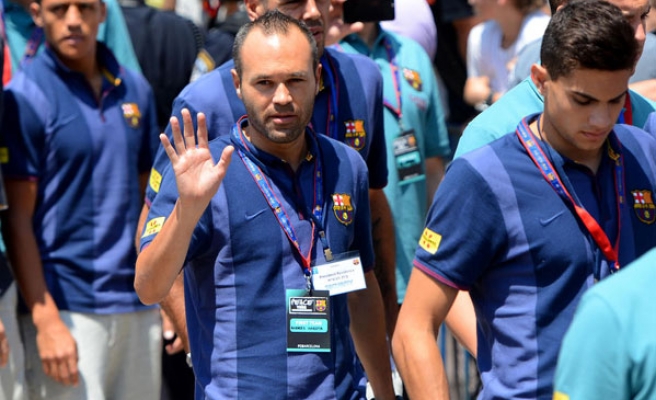 Palestinian President Mahmoud Abbas received on Saturday one of the most famous football club of the world, Barcelona, which wants to make contribution to the peace process in the Middle East.

The first place visted by the Barcelona players was the historic Church of Nativity, the birthplace of Jesus Christ, in Bethlehem city, at the south of West Bank.

Lionel Messi, the world's number one football player, and his Barcelona teammates made a training with children in Hebron. After the training, Barcelona players including Messi, Neymar, Xavi, Iniesta, Pique and Dani Alves took photos with children.

Barcelona football players visited on Sunday the Wailing Wall in Jerusalem and obtained information about the history of the wall.

Messi and his friends will be received today by Israeli President Shimon Peres in Tel Aviv, capital of Israel. After the reception of Peres, Barcelona players will come together with Prime Minister Benjamin Netanyahu.

Barcelona will also play a football match against a mixed team which consists of Palestinian and Israeli children.