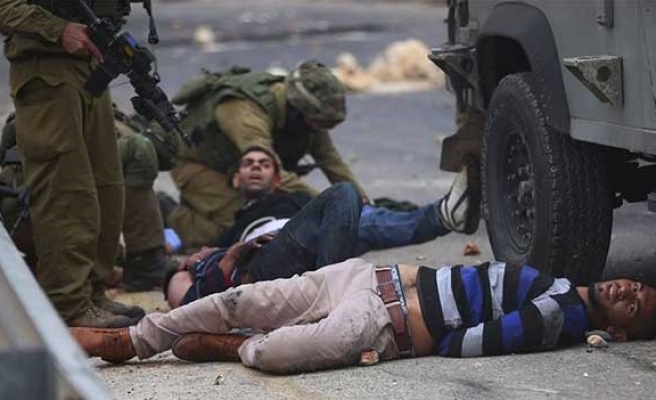 "We come to you today, united in the name of Palestine, to defy Israel's strategy of arresting us, which it is enforcing without discrimination, regardless of political affiliation," one of demonstrators told the crowd.

About 90 students and two faculty members at University have been arrested in the past few months amid an Israeli crackdown.

"[Israeli forces] are specifically targeting students because we are the ones who are able to reach different sections of Palestinian society," a Birzeit University student said.

"The main aim of these tactics is to break us, break our will, and reinforce this internalisation that no matter what we do, they will creep up on us and lock us up, because they have the power to do so," he added.

Birzeit University has long been a hotbed of political activity, and this has held true during the current unrest. Two of its best known alumni are leading Palestinian political prisoner Marwan Barghouti, who serves a life sentence in Israeli jail, and hunger striker Khader Adnan.

Students have organised actions and seminars, in defiance of what they say is Israeli aggression and settler-colonialism, coordinated transportation to clash points between Palestinians and Israeli forces, and distributed brochures on how to deal with Israeli dispersal tactics.

Activists at Birzeit believe that the wave of arrests is part of an Israeli strategy to suppress this mobilisation. "Everything happening is being done by the youth, and it's not being controlled by factions. Instead, it's a collective national endeavour," said Sondos Hamad, the coordinator of the Right to Education Campaign, that aims to raise awareness of the obstacles facing Palestinian students, at Birzeit university.

"Israel is fixating on arresting politically active students as a form of breaking this revolutionary thought and reminding them that any activity will be met with a form of suppression such as arrests."

In early October Abdul Latif abu-Hijleh, the acting president of Birzeit University, called for the release of students. "Israel is responsible for the well being of the students who are demonstrating peacefully against the occupation," abu-Hijleh said, adding that both human rights organisations as well the international community should take action against Israeli tactics impeding the right to education for Palestinian students.

Several Birzeit students have been arrested for Facebook posts or private messages shared with friends where students speak of their support for the ongoing escalations.

The Israel's arrests have taken place amid an escalation in violence in the West Bank and Jerusalem since last October. An outbreak of mass demonstrations took place across Israel and the occupied territories by Palestinians in protest at Israeli raids into the al-Aqsa Mosque compound and the continued settlement expansion. In 2015, Israeli soldiers or settlers shot and killed 179 Palestinians.