Abbas said, "We will not accept (negotiations) until legitimacy is the foundation and they cease settlement completely." 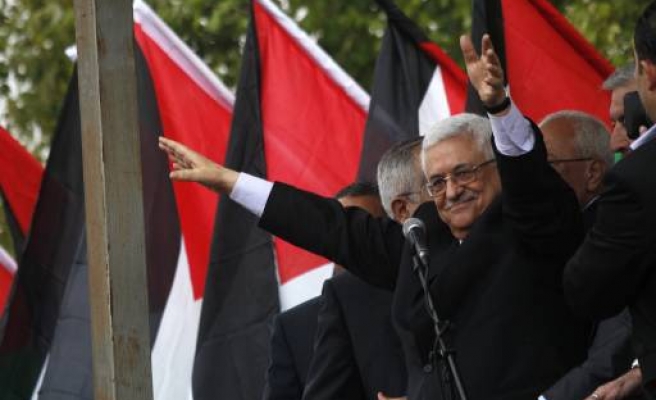 Palestinian President Mahmoud Abbas repeated on Sunday his demand for Israel to freeze illegal settlements to resume talks after international mediators, responding to his United Nations bid for statehood, urged negotiations within a month.

"We have confirmed to all that we want to achieve our rights through peaceful means, through negotiations -- but not just any negotiations," Abbas told a cheering crowd of thousands on his return to the West Bank city of Ramallah.

"We will not accept (negotiations) until legitimacy is the foundation and they cease settlement completely," he said, two days after presenting the application for Palestinian statehood and addressing the U.N. General Assembly in New York.

U.S.-brokered peace talks collapsed a year ago after Israeli Prime Minister Benjamin Netanyahu refused to extend a 10-month limited moratorium on construction in settlements in the occupied West Bank.

Palestinians say the settlements, built on land Israel occupied since 1967, would deny them a viable state.

Netanyahu, who has refused a settlement freeze, gave no indication in his own speech at the U.N. of any change in his position.

The United States, Israel's closest ally, has said it will block the statehood move in the Security Council, which is expected to convene on Monday to discuss the application Abbas made after 20 years of failed Israeli-Palestinian talks.

Neither Israel nor the Palestinians have responded formally to a plan from the so-called Quartet of Middle East peace negotiators -- the United States, Russia, the European Union and the U.N. -- for a return to direct negotiations.

The forum urged Israel and the Palestinians to meet within a month and set a new agenda for talks, with the aim of achieving a peace deal by the end of 2012 that would result in the creation of a Palestinian state alongside Israel.

Netanyahu reserved an official reply until he meets with senior cabinet ministers after his return on Monday from New York.

Abbas has said he would discuss the ideas with Palestine Liberation Organisation (PLO) leaders and other senior Palestinian officials.

Hours before Abbas returned to the West Bank, Netanyahu's foreign minister, Avigdor Lieberman, said there would be "tough repercussions" if the U.N. approved the statehood application.

Lieberman, who heads a far-right party in Netanyahu's governing coalition, did not spell out what revenge Israel might take. He said Israel had reservations about the Quartet's proposal but was "ready to open immediate negotiations" with the Palestinians.