Israeli soldiers used teargas, rubber bullets and live ammunition to confront the angry Palestinians, according to the witnesses. 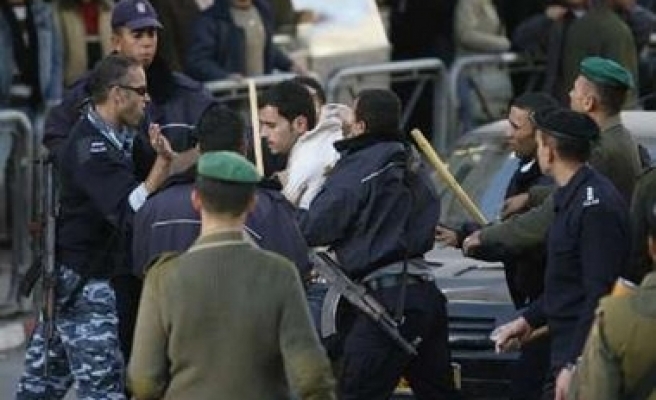 Clashes broke out between Palestinian youth and Israeli forces in the West Bank town of Hebron (Al-Khalil) on Wednesday for the third consecutive day.

Israeli soldiers used teargas, rubber bullets and live ammunition to confront the angry Palestinians, according to the witnesses.

Around 15 Palestinians suffered gas inhalation and were treated on the spot, the eyewitnesses said.

The Israeli army has been searching for suspects in the killing of an Israeli soldier, who was shot dead near the Ibrahimi Mosque in Hebron on Sunday, in an attack claimed by the Al-Aqsa Martyrs Brigades, the armed wing of the Fatah group, in "response to attempts to storm Al-Aqsa Mosque" by Israeli settlers.

Another soldier was found dead in the West Bank town of Qalqilya earlier this week.

"The army stops cars and searches Palestinian citizens, which creates traffic jams in the city," al-Gabour, a member of the "Popular Resistance Committees", told the AA.

Clashes erupted in southern Bethlehem when Palestinian youths pelted an Israeli checkpoint with stones and Molotov cocktails, according to eyewitnesses.

Meanwhile, a youth coalition named "Intifada Youths Alliance" has renewed calls for Palestinians to take part in demonstrations on Friday against Israeli violations in Al-Aqsa mosque.

The demonstrations are expected to coincide with the 13th anniversary of the Palestinian Intifada (uprising).

A large number of West Bank residents have received text messages inviting them to take part in the Friday demonstrations.

The invitation was made one week before the anniversary of the Palestinian uprising, which erupted when former Israeli prime minister Ariel Sharon entered al-Aqsa Mosque in 2000. The ensuing confrontations left a large number of Palestinians dead and injured.

Palestinians are afraid that Israel would divide Al-Aqsa Mosque as it did the Ibrahimi Mosque when an extremist Israeli settler killed 29 Palestinians who were praying at the mosque in 1994.