﻿Clashes occurred just a few hundred meters from the home of slain teen Mohamed Hussein Abu Khdeer and in several other areas of Jerusalem. 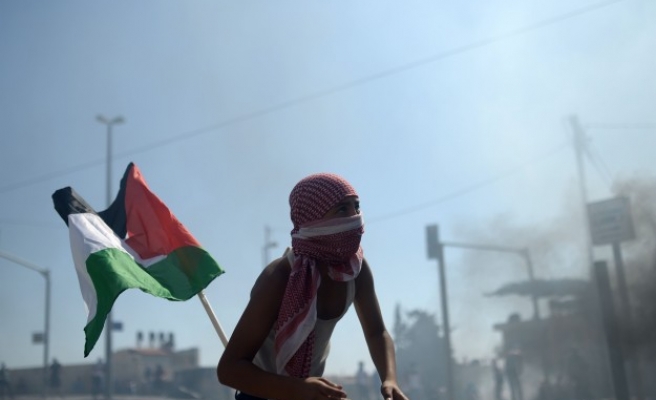 Clashes broke out on Friday in several parts of Jerusalem between Palestinian youths and Israeli soldiers, only moments after the funeral of a 16-year-old Palestinian boy abducted and killed in a suspected "revenge" attack by Jewish settlers.

Clashes occurred just a few hundred meters from the home of slain teen Mohamed Hussein Abu Khdeer and in several other areas of Jerusalem, including Beit Hanina and Silwan.

They were the worst clashes to be seen in the holy city in years.

Israeli helicopters have been hovering over East Jerusalem – presumably to monitor the area – ever since the charred body of the Palestinian teen was found in a forest near Jerusalem.

Earlier in the day, thousands of Palestinians took part in a massive funeral in East Jerusalem. Mourners called for revenge as they carried Abu Khdeer's coffin through East Jerusalem's Shuafat neighborhood.

"The lives of three Israeli settlers are much more valuable to Israel than our lives are," Arab Knesset member Ahmed Tibi said, standing beside Abu Khdeer's father as the boy was buried.

"We are here to say with thousands of people in Shuafat, Ramallah and in all Palestinian lands, that this boy was a son to all Palestinians," Tibi added.

The boy's death followed the discovery of the bodies of three Israeli teenagers who had gone missing from a West Bank settlement some three weeks earlier.

Initial autopsy findings from the body of an East Jerusalem youth who Palestinians believe was kidnapped and killed by far-right Jews showed that he was burned alive, the Palestinian attorney-general is reported as saying.

"The direct cause of death was burns as a result of fire and it's complications," Mohammed Al-A'wewy was quoted as saying by Palestinian official news agency Wafa late on Friday.

Saber Al-Aloul, the director of the Palestinian forensic institute, attended the autopsy which was carried out by Israeli doctors in Tel Aviv.

Al-A'wewy said Al-Aloul had reported fire dust material was found in Khudair's respiratory canal which meant "the boy had inhaled this material while he was burnt alive."

Burns covered 90 percent of the surface of the body. The head suffered a cut. Samples like liquids and tissues were taken for more lab examinations to complete the legal medical report.

Speaking to Anadolu Agency, Mahmoud Falah Abu Khdeer, imam of the Shuafat Mosque, outside which the slain boy was abducted, said the state of the slain boy's body when found "was indescribable."

"It was all black and unrecognizable, like it had been grilled in a fire. I wasn't even able to wash it; I just changed his clothes. I asked his father's permission to take a photo of the body to show the world how cruel the Israeli settlers are," he told AA.

The imam went on to accuse the Israeli government of inciting violence against Palestinians.

"Israeli policy is to encourage settlers to kidnap and attack Palestinian women and children. Their so-called 'religious leaders' urge them to attack us, giving a green light to their criminal activities," the imam added.

He added, however, that he had many Jewish friends who didn't agree with this "aggressive" policy.

"I respect what one of the fathers of the three [slain] settlers… told the press," the imam went on. "He didn't ask for revenge; he said killing was a criminal act whether the victim was Muslim, Christian or Jewish."

Warplanes fired three rockets at a facility belonging to Gaza's National Security apparatus near the border with the Egyptian city of Rafah.

Another rocket fell in agricultural land near Palestinian Rafah in the Gaza Strip, according to eyewitnesses.

Earlier Friday, a young Palestinian man was shot in the back by Israeli forces near a refugee camp in central Gaza, according to Gaza Health Ministry spokesman Ashraf al-Qudra.

Israeli forces had earlier launched a series of airstrikes on Gaza and a mass arrest campaign in the West Bank. Palestinian fighters, meanwhile, fired dozens of rockets into Israel.