Israeli troops shot dead two Palestinians in the West Bank city of Hebron, and the military said they were members of Hamas 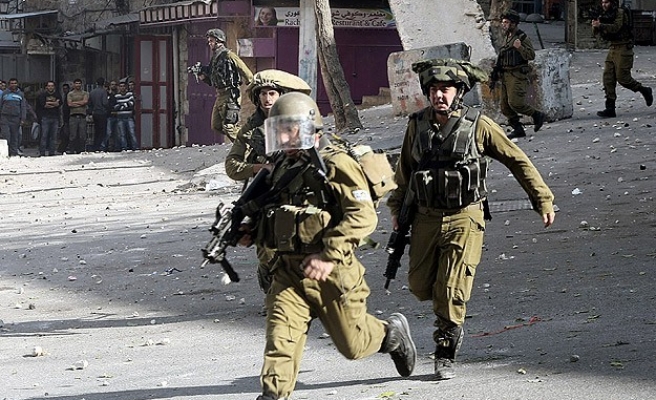 Hebron province spokesman Hossam Abdeen told Anadolu Agency that the Israeli army had besieged the Jamaa neighborhood and was barring local residents from entering the area.

The army also destroyed 15 shops in the neighborhood, Abdeen added.

Earlier Tuesday, the Israeli army said it had killed two suspects – Marwan Qawasmeh and Amer Abu Aisha – after besieging the building in which they had been holed up in central Hebron.

A joint force consisting of army troops and internal security agency (Shin Bet) agents managed to track the pair down and kill them, according to an army statement.

Israeli authorities had accused the two men of having been recruited by a West Bank Palestinian named Hossam Qawasmeh – currently in Israeli custody – to help the latter kidnap and kill three teenage Jewish settlers in June.

The Israeli authorities further claimed that Qawasmeh had confessed to receiving funds from Hamas to recruit Abu Aisha and Qawasmeh for the operation.

The Israeli government has repeatedly accused Hamas of kidnapping the three settlers, who went missing from a Jewish-only settlement in the southern West Bank on June 12 and later turned up dead.

Hamas, for its part, dismisses the claims, describing them as "fabrications."

The Palestinian delegation to Gaza ceasefire talks in Cairo decided to proceed with the negotiations on Tuesday, a senior Hamas leader said, despite Israel's killing of two in the occupied West Bank.

"After consultations within the Palestinian delegation and brothers in Gaza and abroad it was decided to continue the Cairo meetings," Mahmoud al-Zahar told Reuters by phone from the Egyptian capital after a member of the team said it was considering withdrawing from the talks.

Zahar condemned the killing earlier on Tuesday of two Palestinians. But he said Israel must not be given any pretext "to escape from commitments" of an Aug. 26 truce that called for talks within a month on long-term border arrangements for the blockaded Gaza Strip.

Since mid-June, Israeli forces have detained hundreds of West Bank Palestinians – including several Hamas lawmakers and former cabinet ministers – against the backdrop of the three settlers' death.

The Palestinian delegation said the timing of the Hebron raid was intended to undermine the talks. "It comes as part of the stalling of the indirect negotiations to end the suffering of our people," a statement said.

Fifty days of conflict between Hamas and Israel has left devastation in some Gaza districts, in the small, densely populated territory of 1.8 million people. More than 2,100 Palestinians, most of them civilians, were killed in the fighting, according to the Gaza health ministry.

The Palestinians want an end to the blockade of Gaza by Israel and Egypt.

The Palestinians are expected to press for construction of a sea port for Gaza and Israel's release of Hamas prisoners in the West Bank, possibly in a trade for the remains of two Israeli soldiers believed to be held by the group.

At last month's talks, the two sides did not meet face-to-face but conducted their negotiations through Egyptian officials.