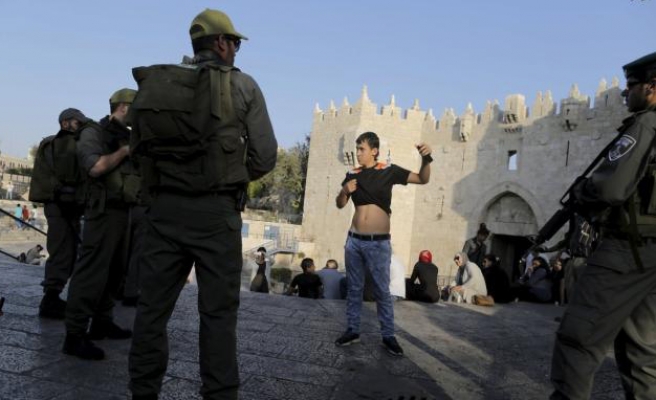 The sniper barrel juts out of the ancient wall above Jerusalem's Damascus Gate, pointing down towards a young Palestinian being searched by Israeli policemen.

A key tourist site and one of the entrances to the Old City, the massive white stone gate has become a backdrop for the violence between Israel and Palestinians that erupted almost five months ago.

Israeli policemen line the courtyard beneath the gate, which is flanked by two towers and was built in the 16th century by Suleiman the Magnificent.

Snipers have positioned themselves on nearby roofs and new surveillance cameras have been set up beside dozens of others already installed.

Trees that once cast shade over green areas nearby have been cut back or even uprooted to give the cameras a clear view.

Damascus Gate, one of seven historic gates in the city, leads into Israeli-annexed east Jerusalem.

A web of alleyways where Palestinians, Israelis and tourists cross path lie beyond the gate, which also leads toward Al-Aqsa mosque compound, the Western Wall and the Church of the Holy Sepulchre.

But the gate's history has been overshadowed by deadly violence in recent months.

On Friday, a 20-year-old Palestinian stabbed and wounded two policemen outside Damascus Gate before they shot him dead.

And on February 3, three young Palestinians from the nearby occupied West Bank killed an 19-year-old Israeli policewoman before they were shot dead.

Since October 1, Palestinian knife, gun and car-ramming attacks have taken the lives of 27 Israelis, an American and an Eritrean, according to an AFP count.

Most of the assailants have been teenagers or young men and women, and recent security checks have focused on that age group.

Near Damascus Gate, three policemen conduct a body search on a young man, who stands legs and arms apart against the wall.

One policeman points his gun to his head while his two colleagues keep an eye on their surroundings.

The young man is patted down thoroughly from head to toe and asked to remove his shoes. His backpack is emptied of all its items, one by one. His identity papers are checked.

Only then is he allowed on his way.

"I live in the Old City so I have to go through this every single day," says the young man who asked to remain anonymous.

"It's really annoying," he adds, his face visibly tense.

"Sometimes, the searches have no security justification. It's just provocation. It depends on the soldiers' mood."

"Before, I used to refuse that they search me in public and they'd take me aside to a police station," he adds.

But "now I don't dare anymore, I'm too scared they'll kill me in cold blood, now they have a ready-made accusation to kill us."

Around him, women and school students open up their handbags and school bags to have them checked with the security forces' guns pointed at them.

Earlier this month, the Israeli parliament passed a law authorising the police to stop and search "any person appearing to be reasonably suspicious" as long as they agree to the search.

But at Damascus Gate, journalists did not hear policemen ask for the consent of the young people they were searching.