Desperate for cement and bulldozers, Gazans face winter in ruins

"The cement and gravel are being regulated as if they were a nuclear weapon," said Sari Bashi, co-founder of Gisha, an Israeli organisation which monitors access to Gaza 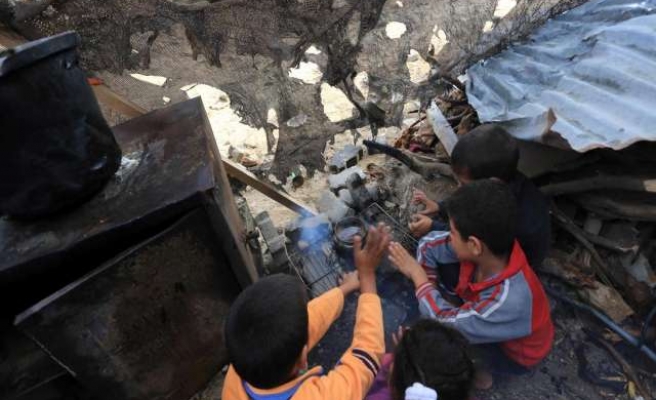 Three months after the war in Gaza, Sadeeqa Naseer still lives in a bomb site. Air strikes turned the two upper floors of her three-storey apartment building in the Gaza Strip town of Beit Hanoun into a rubble-strewn ruin.

Thirty-five people shelter on the ground floor, where holes blasted in the wall by tank shells have been covered over only by plastic sheeting that does little to keep out the cold wind and driving rain of the fast-approaching winter.

Someone managed to extend an electric cable from a nearby building, providing just enough power to run a fridge and keep a single lamp on during the night. But there is no cement to rebuild, and no one can get a bulldozer to clear the rubble. Men were chipping futilely at concrete slabs with hammers.

"Who could live here?" asks Naseer, 60, who said she had received no aid from the United Nations or anyone else.

Since the July-August war, in which more than 2,100 Palestinians and 70 Israelis were killed, barely any progress has been made rebuilding the shattered territory, despite donors pledging $5 billion.

Israel tightly monitors the import of construction materials and equipment into Gaza, arguing that otherwise it could be used to rebuild tunnels used by Hamas who control the strip.

Palestinian officials and critics of Israeli policy say that has made it impossible to rebuild, leaving 40,000 of the strip's 1.8 million residents in temporary shelter and thousands more facing winter in barely habitable ruins.

"The cement and gravel are being regulated as if they were a nuclear weapon," said Sari Bashi, co-founder of Gisha, an Israeli organisation which monitors access to Gaza and says only a tiny fraction of cement needed to satisfy demand is reaching the strip.

"I am the unluckiest housing minister in the world," said Mufeed al-Hasayna, a businessman who spent most of his career in New Jersey before joining a technocratic Palestinian government formed this year to unite Hamas-run Gaza with the West Bank.

According the Hasayna, Gaza needs 8,000 tonnes of cement a day to meet demand. A new system set up with the United Nations to comply with Israeli requirements lets through at most 2,000, he said.

At that rate, reconstruction would take more than 30 years, said Hasayna, one of four members of the unity government based in Gaza rather than the West Bank.

"We have 18,000 fully destroyed buildings and about 50,000 partially destroyed ones," he said. "Gaza before the war needed about 70,000 apartments a year to keep pace with population growth. Now after the war, Gaza needs 150,000 new apartments."

Since the war, electricity has been partially restored so that power is now cut for only eight hours a day. Sewage and water treatment plants are mostly working again, although there is still almost no drinking water.

But in terms of clearing the vast mountains of rubble and mangled steel, rebuilding homes and patching up smashed roads, bridges and other infrastructure, next to nothing has happened.

The biggest difficulty is moving reconstruction materials and other equipment into Gaza. Egypt has largely kept its border with Gaza closed, so any goods must be transferred from Israel, which has two crossings open: one for goods, one for people.

To satisfy Israeli demands for precise tracking of all cement, the United Nations came up with a strict mechanism that involves video and GPS monitoring of materials, which can only be transferred to vetted suppliers.

For ordinary Palestinians who do not have access to the official supplies, if they can find any cement at all, they can buy it only from the black market at more than $50 a bag, more than seven times the normal price.

Clearing away rubble is all but impossible, with little access to diggers and bulldozers.

Hasayna, the housing minister, signed an agreement with the U.N. Development Programme and the Swedish government last week to equip and hire local contractors to clear and recycle rubble from northern Gaza. It has yet to start on a big scale.

The men chipping away at the concrete slabs outside Sadeeqa Naseer's ruined apartment sell any steel and aggregate they can extract. But they have made little progress with hand tools.

"Thirty-five people are living in conditions that are not tolerable with the help of anyone but God," says Naseer. "We want our house to be rebuilt before cold and sickness kill us."