Palestinian Imad al-Khalidi has developed a replacement for cement to help the Gaza Strip deal with its housing crisis, after the Israeli war left many homes damaged or destroyed 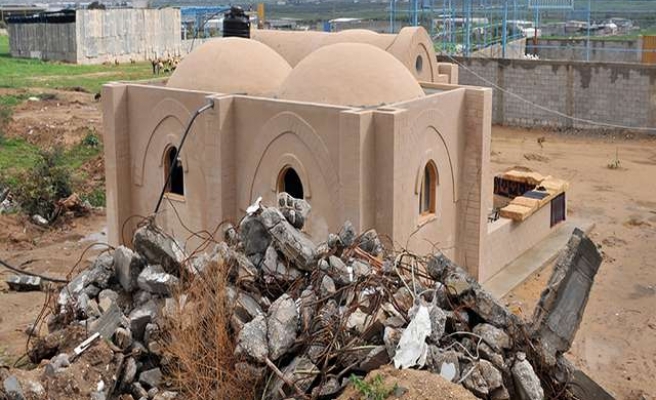 Since the July-August war, in which more than 2,100 Palestinians and 70 Israelis were killed, barely any progress has been made rebuilding the shattered territory, despite donors pledging $5 billion.

Israel tightly monitors the import of construction materials and equipment into Gaza, arguing that otherwise it could be used to rebuild tunnels used by Hamas who control the strip.

Palestinian officials and critics of Israeli policy say that has made it impossible to rebuild, leaving 40,000 of the strip's 1.8 million residents in temporary shelter and thousands more facing winter in barely habitable ruins.

Khalidi, a soil expert in organic architecture, said that the search for alternatives was based on materials found in Gaza according to the report. “We wanted to use local materials as an alternative, to save ourselves and provide the displaced with shelters, as nearly 5,000 housing units were destroyed in the 2008-2009 war. We examined various types of soil in Gaza, and found a suitable type rich in natural welding materials, such as potassium carbonate, magnesium, metal oxides, limestone and sand,” he explained.

He pointed out that the natural materials he found act like cement in its different stages, but they are more solid and can last hundreds of years.

Khalidi explained the process to Al Monitor: “We compose a homogeneous mixture by conducting a soil treatment through pressure, to which we add welding natural materials such as potassium carbonate, ground limestone powder and a small quantity of gypsum, to form an initial coherent product in the brick production. Yet, the strong cohesion begins after it is used and continues to solidify for hundreds of years, and to harden dozens of times more than its initial form. This means that the brick increasingly hardens with time, and has its own characteristics.”

Khalidi established in 2009 his own private factory to produce local bricks in different sizes. At first, he designed machinery operated manually, then he created hydraulic machinery.

Khalidi has kept the price the same as cement for locals looking to build homes, while upping the price for commercial projects.

Gaza's Housing Minister Mufeed al-Hasayna said Gaza needs 8,000 tonnes of cement a day to meet demand. A new system set up with the United Nations to comply with Israeli requirements lets through at most 2,000, he said.

At that rate, reconstruction would take more than 30 years, said Hasayna, one of four members of the unity government based in Gaza rather than the West Bank.

"We have 18,000 fully destroyed buildings and about 50,000 partially destroyed ones," he said. "Gaza before the war needed about 70,000 apartments a year to keep pace with population growth. Now after the war, Gaza needs 150,000 new apartments."

Since the war, electricity has been partially restored so that power is now cut for only eight hours a day. Sewage and water treatment plants are mostly working again, although there is still almost no drinking water.

But in terms of clearing the vast mountains of rubble and mangled steel, rebuilding homes and patching up smashed roads, bridges and other infrastructure, next to nothing has happened.

The biggest difficulty is moving reconstruction materials and other equipment into Gaza. Egypt has largely kept its border with Gaza closed, so any goods must be transferred from Israel, which has two crossings open: one for goods, one for people.

To satisfy Israeli demands for precise tracking of all cement, the United Nations came up with a strict mechanism that involves video and GPS monitoring of materials, which can only be transferred to vetted suppliers.

For ordinary Palestinians who do not have access to the official supplies, if they can find any cement at all, they can buy it only from the black market at more than $50 a bag, more than seven times the normal price.