Tariq Abu Khdeir's U.S. relatives have called for those responsible for his beating to be held to account. 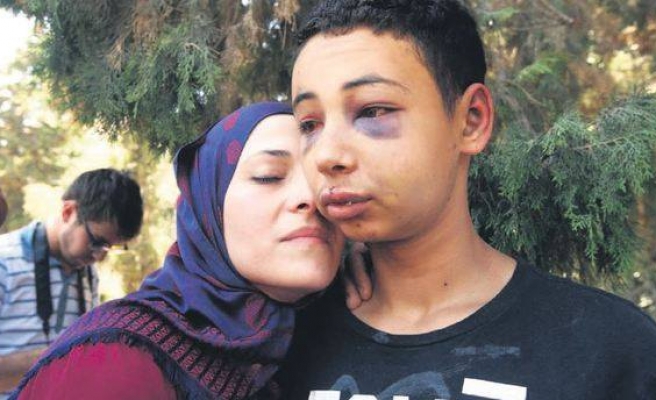 The family of Palestinian-American teenager Tariq Abu Khdeir have made an emotional plea for justice and called for those responsible for his brutal beating to be held to account.

Israeli police officers allegedly beat the 15-year-old during a demonstration commemorating the gruesome killing of his cousin Mohammed last week. The assault on Tariq was caught on video.

Photographs taken shortly after the beating show him with a swollen and bloodied face, barely recognizable from photos taken before the assault.

“I want justice,” Tariq’s cousin Hakeim Abu Khdeir said on Tuesday. “I want those who did this to be prosecuted for what they did to this minor.”

Speaking exclusively to Anadolu Agency following a press conference hosted by the Council on American Islamic Relations in Washington D.C., he added: “I want justice for those who beat my cousin.”

Another cousin, Maria Baroody, expressed confidence that some within Israel’s judiciary will pursue justice for her cousin Tariq. “I’m sure there are people within the Israeli courts who want justice. I’m sure,” she said.

Tariq was released from Israeli custody, but was sentenced to nine days house arrest on Sunday and ordered to pay a fine of approximately $900.

Baroody said that Tariq was due to undergo medical tests on Tuesday, but that the family “want him here. We want him to get American medical attention.”

Tariq’s 16-year-old cousin, Mohammed, was abducted from the East Jerusalem neighborhood of Shuafat by suspected right-wing Israeli extremists and taken to the forests outside of Jerusalem where his burned body was discovered. A preliminary autopsy report showed that he had been burnt alive by his kidnappers.

The murder has sparked fierce demonstrations throughout Israel and the occupied territories.

Six suspects have been arrested in relation to Mohammed’s murder.