Israel was punishing the Palestinians by withholding tax revenues while profiting by selling them its commodities. 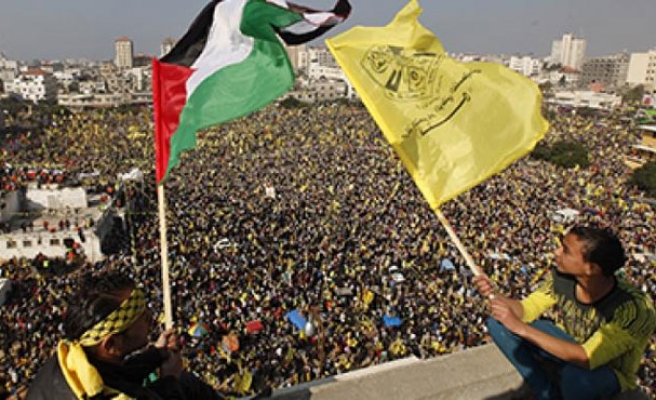 At a protest staged in central Ramallah, the movement added that this should be done by blocking roads used by Israeli settlers and clashing with the Israeli army, especially at Israeli checkpoints near Palestinian towns.

Participating in the protest were dozens of Fatah members who carried placards calling on Palestinian consumers to boycott Israeli goods.

"By organizing this protest, we want to drive home the point that Israel carries out fascist and racist actions aimed at starving the Palestinian people," Jamal Mehesin, a member of Fatah's central committee, told The Anadolu Agency.

"We're calling [on Palestinians] to step up popular opposition and boycott Israeli products," he added.

He said Israel was punishing the Palestinians by withholding tax revenues while profiting by selling them its commodities.

In late December, the Israeli government decided to hold back around $125 million in tax revenues it had collected on behalf of the Palestinians.

Abbas signed the membership applications after the UN Security Council in December rejected a Palestinian draft resolution that would have set a deadline for ending Israel's decades-long occupation of Palestinian land.

Fatah spokesman Ahmad Assaf said that Monday's protest marked the beginning of a new stage of popular resistance against the Israeli occupation.

"The next few days will witness a number of activities to protest the occupation and Israeli settlers," Assaf told AA.

"We will not allow them [the Israelis] to confiscate our land and expand their [Jewish-only] settlements," he added.