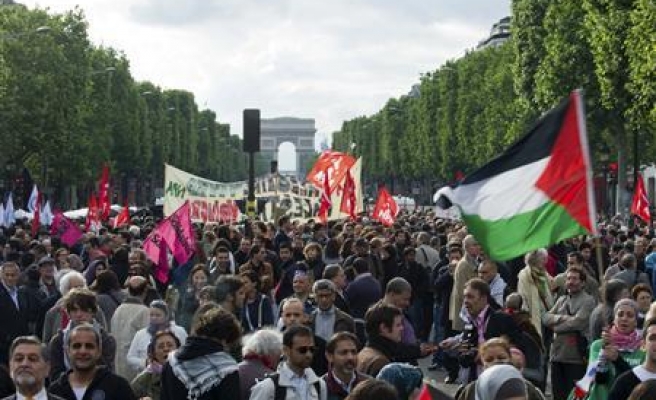 World Bulletin/News Desk
After the French National Assembly adopted a resolution calling on the government to recognize the State of Palestine, the Senate will vote on Thursday on a similar resolution, submitted by the Greens parliamentary group.

The draft resolution is symbolic, as was the one passed by the Assembly on Dec. 2. However, experts believe that the support of France will strengthen the position of Palestine in peace negotiations.

Presented by members of the ruling Socialist Party parliamentary group, the draft resolution was adopted by 339 votes in favor to 151 votes against.

"If this last attempt at negotiation does not succeed, France will assume its responsibilities by recognizing the State of Palestine," Fabius said.

"France recognizes the State of Palestine; it is not a favor, it is a right," he said.

"France is a friend of the Israeli people and the Palestinian people. France will recognize the State of Palestine. The question is when and how? Because it is necessary that this recognition should be useful to efforts to break the deadlock and contribute to achieving a final settlement of this conflict," he added.

The French parliament is made up of two chambers, the National Assembly -- the lower house which has the final say in drafting legislation -- and the Senate, which is the upper house.

Wave of recognition in Europe

Europe has been swept lately by a wave of support for Palestinian statehood, as the peace process between Palestinian and Israeli sides remains deadlocked.

The European Parliament had been scheduled to vote on a motion to recognize Palestine on Nov. 27.

Due to disagreements over the wording of the motion, the decision was postponed until Dec. 18, a European Parliament press release said.

The European Parliament resolution, which was proposed by the left-wing European United Left and the Socialists and Democrats parliamentary groups, is expected to pass, despite Israeli efforts to block it.

Denmark’s lawmakers will debate a similar motion in December and other parliaments are expected to vote on similar resolutions in the coming weeks, including the Italian, Slovenian and Portuguese legislatures.

More than 130 countries have now recognized Palestine as a state.