UNRWA helps Palestinian refugees from Israel occupation and their descendants who make up around half of Gaza's 1.5 million population. 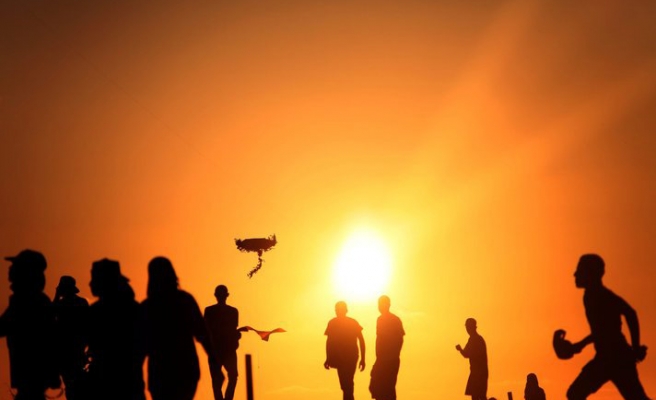 Some 15,000 children flew kites over the Gaza Strip on Thursday, claiming a new world record for most kites flown simultaneously and raising cheers in the Palestinian enclave that is more used to sufferings of Israeli siege and bombings.

Chris Gunness, the spokesman for the United Nations Relief and Works Agency (UNRWA) said verifiers had so far tallied at least 13,000 kites were flown and the final figure would be published on Friday.

"The children broke the record today, it was absolutely beautiful," said Julia Hurley, one of a group of visitors to the Gaza Strip who had come to verify the record.

The previous record, 10,465, was set in April in Weifang City, China, according to the Guinness World Records.

Vandals struck an UNRWA youth centre in the Gaza Strip hours before the record attempt, a spokesman and witnesses said, but it did not prevent the flyers flying their kites and dotting the clear blue Mediterranean skies.

It said 10 people, so far unidentified, had torched a stage at the "Summer Games" facility and burned a U.N. flag and damaged a billboard. No one was hurt.

UNRWA helps Palestinian refugees from Israel occupation and their descendants who make up around half of Gaza's 1.5 million population.