More than 200 fishing boats headed out from Gaza's port on Sunday night, with most returning early on Monday 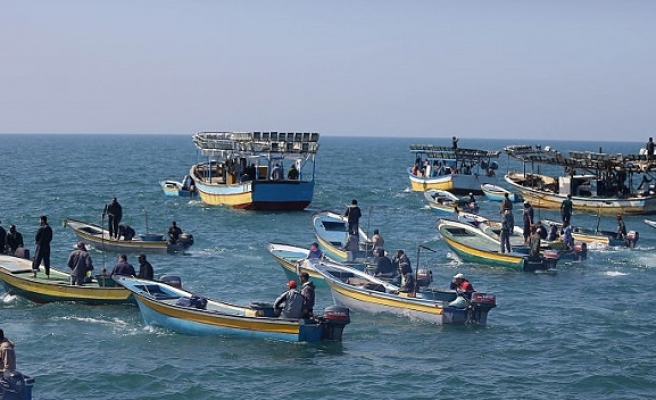 Gaza fishermen have begun working further off the coast after Israel relaxed restrictions for the first time in a decade but said Monday that the measure was not nearly enough.

Palestinian boats working in the southern part of Gaza Strip started to fish as far as nine nautical miles off the coast on Sunday, the first extension to the zone since 2005.

Previously they had been restricted to six nautical miles, the same distance that remains in place off the northern part of the Palestinian enclave which borders Israel.

More than 200 fishing boats headed out from Gaza's port on Sunday night, with most returning early on Monday.

Raed Abu Ouda, 35, returned from an overnight trip close to the new nine-mile limit, but said he had been disappointed with his catch.

"I hoped with the new permission for a bumper catch," he said. "But after 17 hours of work we didn't get what we expected."

The new nine-mile limit is patrolled by Israeli naval vessels and indicated by signs, he said.

Nizar Ayyash, chairman of the Gaza fishermen's union, said between 200 and 300 ships went out on Sunday night.

The Israeli defence ministry body responsible for implementing government policies in the Palestinian territories, COGAT, estimated on its Facebook page the extended zone could add 400,000 shekels ($106,000) a year to the Gazan economy.

But Ayyash said most had been disappointed and called the extension "inadequate".

He called on the Israeli authorities to further loosen the restrictions to 20 miles, as laid down under the Oslo peace accords of the 1990s.

Israel argues the restrictions are necessary to prevent weapons smuggling in the Palestinian enclave run by Hamas group.

The strip of 1.8 million people has one of the world's highest unemployment rates and poverty is widespread.

Around 4,000 fishermen work in Gaza, more than half of whom live below the poverty line.

In addition to the maritime limits, Israel has imposed a land blockade on the Gaza Strip since 2006, while Egypt has also largely closed its border with the enclave, leaving it isolated.