The underground tunnels are a lifeline for the Palestinians living in Gaza, which has been under an Israeli blockade since 2006 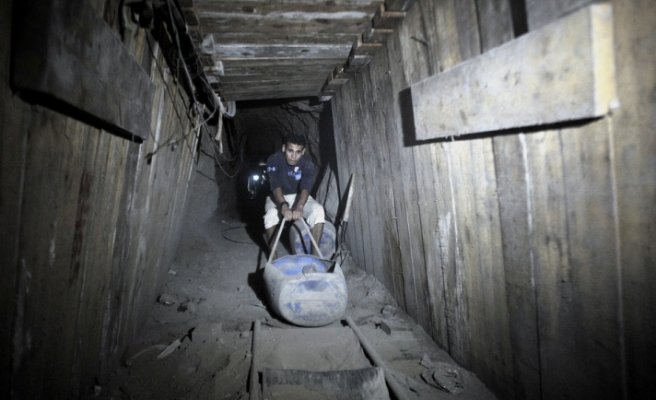 Smuggling tunnels under the borderline between Egypt and the Gaza Strip are partially back in operation to transfer food and fuel into the seaside enclave.

"Twenty tunnels are partially back to work since Sunday out of the 250 tunnels still closed because of Egyptian security measures on borders," a source in the Hamas borders and tunnels authority told Anadolu Agency.

The operational tunnels are being used to smuggle food, fuel and construction materials into Gaza.

About 40 to 50 trucks of cement are smuggled through the tunnels per day, down from 300 to 400 trucks daily.

The source said about 3 million litres of fuel were smuggled through the tunnels in the past five days.

"The quantities of the smuggled materials are far less than those transferred into Gaza before Egyptian security measures," he said.

Underground tunnels are a major commercial artery between Gaza and Egypt.

Egypt has launched a security crackdown in Sinai in the run up to mass protests that led to the army's removal of elected president Mohammad Morsi.

The Egyptian army has destroyed a number of underground tunnels with Gaza borders.

The security crackdown has caused a fuel shortage in Gaza and doubled the prices of building materials.

An owner of a fuel-smuggling tunnel says the army reinforcements are disrupting the smuggling operations through tunnels.

"The smuggling operations are going slowly and at high risks because of the big security reinforcements at Gaza borders," he told AA.

He said army troops destroyed four fuel pumps and a tanker inside a smuggling tunnel on Friday.

But he said eight tunnels now operate to smuggle construction materials into Gaza, out of 50 tunnels.

Another tunnel owner agrees: "Smuggling is being done with great difficulty and at high risks to the life of workers because of army attacks on the tunnels".

Underground tunnels are a lifeline for the Palestinians living in Gaza, which has been under an Israeli blockade since 2006.