Protesting youths held banners aloft reading "I have the right to pray in Aqsa" and "Despite the siege, we haven't forgotten Al-Aqsa." 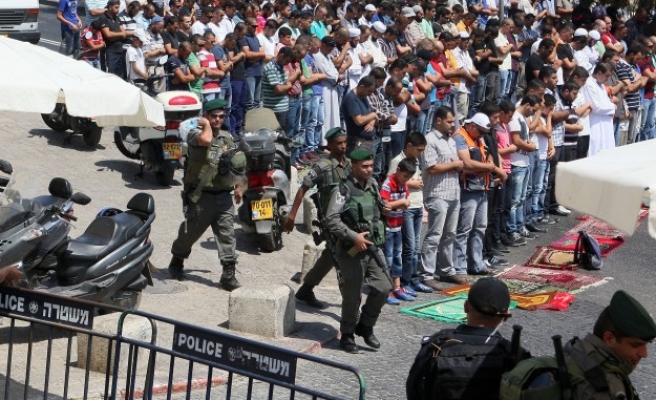 Dozens of Palestinian youths in the Gaza Strip staged a protest on Monday to demand entry into the city of Al-Quds (Jerusalem) to perform prayers at the iconic Al-Aqsa Mosque.

Protesting youths held banners aloft reading "I have the right to pray in Aqsa" and "Despite the siege, we haven't forgotten Al-Aqsa."

"Depriving the Palestinian people of their right to enter Al-Quds is a form of collective punishment that is not acceptable under human rights conventions," protesting youth Raed Moussa told the Anadolu Agency.

"Israel should reverse its decision denying Gazans entry to the Aqsa Mosque in Al-Quds," he added.

The protest was staged outside the civil affairs directorate in Gaza City, which is affiliated to the West Bank-based Palestinian Authority.

Hundreds of Gazans had submitted applications to the directorate to visit Al-Aqsa, but to no avail, Moussa said.

The protest was held in response to calls by online activists for weekly demonstrations to demand access to the holy site, which is considered sacred to both Muslims and Jews.

Since the 2000 Palestinian Intifada (uprising), Israel has denied Gazans access to the West Bank -- including Al-Quds -- except after obtaining official permits, which are usually only granted to Palestinians with special needs.