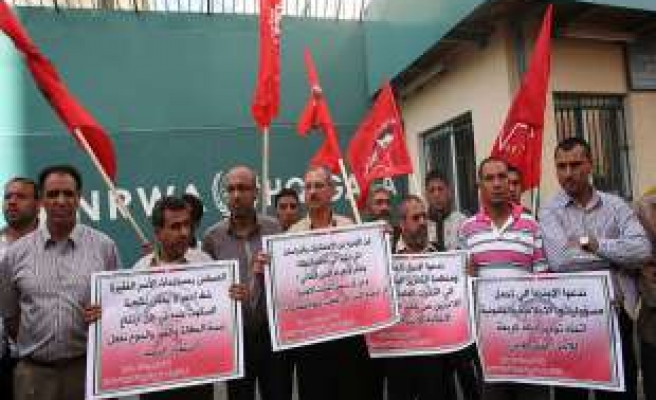 Scores of Palestinians demonstrated outside the Gaza office of United Nations refugee agency UNRWA on Wednesday to protest recent reductions to the financial assistance provided to poor Palestinian families.

Protesters, whose demonstration came in response to calls issued by the Democratic Front for the Liberation of Palestine (DFLP), called on the UN agency to shoulder its responsibilities towards struggling Palestinians.

"Financial aid to poor families is a red line," read one of the banners carried by protesters. "What is UNRWA's position on rising in unemployment?" read another.

Youssef al-Halabi, an activist from the DFLP (a leftist organization that is part of the Palestinian Liberation Organization), voiced opposition to the recent reductions of aid and health and educational services provided to poor Palestinians by UNRWA.

"This reduction aims to do away with Palestinian refugees' rights," al-Halabi said.

He called on the UNRWA to not make poor Palestinian refugees pay the price for the agency's current financial deficit.

Al-Halabi went on to ask the international community and donor countries to honor previous commitments to Palestinian refugees and UNRWA aid programs.

Last month, the UNRWA announced plans to slash food aid to 21,000 Palestinian families in the impoverished Gaza Strip, home to some 1.7 million inhabitants.

In earlier press statements, UNRWA Director of Operations in Gaza Robert Turner said the aid reductions came following a reassessment last year of which families could qualify for the aid.

According to Turner, some 10,000 Palestinian families are no longer qualified to receive the assistance.