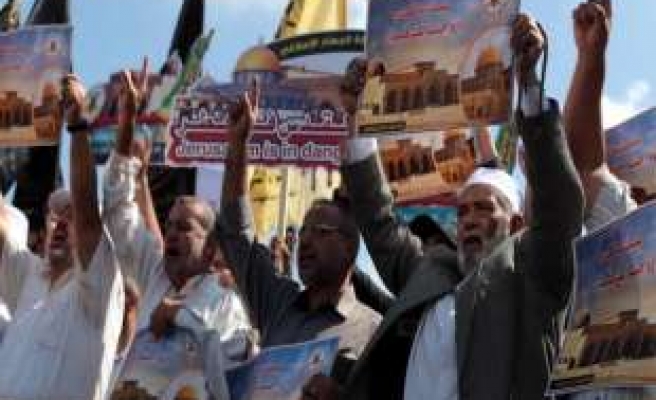 Palestinians took to the streets of Gaza on Tuesday to mark the 13th anniversary of the 2000 uprising against Israel's ongoing occupation of Palestine.

Waving Palestinian flags and pictures of the Aqsa Mosque, protesters marched through the streets before rallying outside the local United Nations office.

"We're determined to pursue the struggle until the Israeli occupation of Palestinian land has ended," Mohi al-Din Abu Doka, a representative of national and Islamic groups, told protesters.

"The battle to liberate Al-Quds [Jerusalem] and the Aqsa Mosque requires that the Palestinians close ranks to counter the Israeli plots aimed at dividing the holy city," he added.

Abo Doka called on Arab and Islamic peoples around the world "to rally to defend Al-Quds and expel Israeli occupation forces from Palestine."

On Saturday, Palestinians marked the 13th anniversary of the eruption of the Aqsa Intifada, over the course of which thousands of Palestinians were killed and injured.

The uprising was initially triggered by a visit in 2000 by then Israeli opposition leader Ariel Sharon to the Aqsa Mosque – a site revered by both Muslims and Jews.