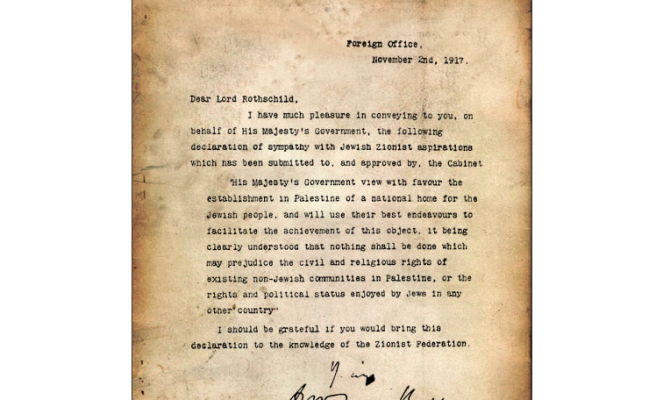 The Balfour Declaration was the “colonial bridgehead” that paved the way for suffering of Arabs and Muslims in Palestine, according to Hamas spokesman on Tuesday.

Sami Abo Zuhri made the remarks during a seminar organized by the Jerusalem (Al-Quds) Awareness Association in capital Ankara to mark the centennial of the 1917 declaration.

“The declaration was made at the behest of a European will aimed at establishing a colonial bridgehead inside the Arab region by planting a Zionist entity there,” Abu Zuhri said.

He referred to the Ottoman Empire’s role in undermining Zionist attempts to establish a Jewish state in Palestine.

“All the Jewish bids to establish a state in Palestine at that time were strictly opposed by the Ottoman Empire, thanks to Sultan Abdulhamid II,” he said, adding: “That’s why we [Palestinians] keep praising the role of the Sultan till this day.”

Regarding Israeli claims that it bought -- not occupied -- most of the Palestinian territories before 1948, Abu Zuhri said: “It was Britain that forcefully grabbed the territories from Palestinians and handed them over to the Palestine-based Jews.”

About recent reconciliation efforts among Palestinian political groups, Abu Zuhri confirmed that ending internal split was a choice that Hamas made.

“Hamas is serious about carrying out all terms of the Cairo agreement,” he said.

About Israeli condition that it would reject talks with any Palestinian government that includes Hamas, he said: “Hamas didn’t and would not recognize the so-called Israel.

“Hamas, as well, would not relinquish its weapons under any condition.

“We know that the situation is difficult and disappointing but we believe in Allah and the Islamic nation.”

If it holds, the deal will allow the Fatah-led Palestinian government in Ramallah to assume political and administrative responsibility for the Gaza Strip, which since 2007 has been run by Hamas.