Hamas calls for W. Bank marches in defense of Al-Aqsa

Hamas called on Palestinians to march on Israeli army checkpoints set up in and around Jerusalem's Old City. 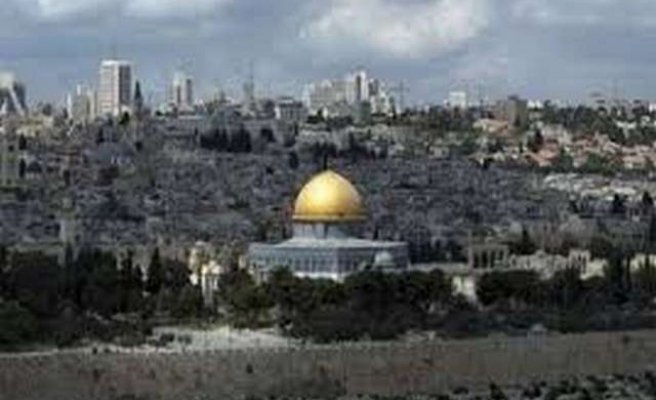 Palestinian faction Hamas' office in the occupied West Bank on Thursday called for staging "marches of anger" on Friday to express solidarity with the Al-Aqsa Mosque and Jerusalem.

Friday's planned marches are expected to coincide with other West Bank rallies organized by groups of Palestinian youth to support of the iconic house of worship and Jerusalem's Old City.

Under the banner, "Our Al-Aqsa, not their Temple Mount," a reference to the Jewish name for the Al-Aqsa Mosque complex, Hamas said the planned marches would begin immediately after weekly Friday prayers.

In a statement, Hamas called on Palestinians to march on Israeli army checkpoints set up in and around Jerusalem's Old City.

Independent groups of Palestinian youth had earlier called on Palestinians to stage marches in defense of Al-Aqsa.

Under the banner, "Toward Jerusalem we shall head," Palestinian youths said they would set out from the Kalandia refugee camp near Ramallah for Jerusalem.

The Israeli army is expected to prevent marchers from traversing the Kalandia checkpoint, which separates Jerusalem from Ramallah.

The checkpoint has been the scene of numerous clashes between Palestinian protesters and Israeli troops in past years.

Tension has run high in the occupied West Bank and Jerusalem since Israel's temporary closure of the Al-Aqsa Mosque complex late last month – a move described by Palestinian Authority President Mahmoud Abbas as a "declaration of war."

On October 30, the mosque compound was shut for several hours after an extremist rabbi was injured in a drive-by shooting in West Jerusalem.

Unrest mounted further after Israeli forces subsequently killed a young Palestinian man suspected of shooting the rabbi in a raid on his East Jerusalem home.

Further aggravating the situation, several Israeli MPs have also forced their way into the Al-Aqsa Mosque complex in recent days and weeks, drawing the ire of Muslim worshippers and official condemnation from Arab and Muslim countries.

At least four Israelis – a police officer, a soldier, a female settler and a baby – have been killed and several others injured in separate attacks by Palestinians over the last two weeks.

Israel occupied East Jerusalem and the West Bank during the 1967 Middle East War. It later annexed East Jerusalem in 1980, claiming it as the capital of the self-proclaimed Jewish state – a move never recognized by the international community.