Israel has been pounding the Gaza Strip since Tuesday following the collapse of a temporary ceasefire with Palestinian factions. 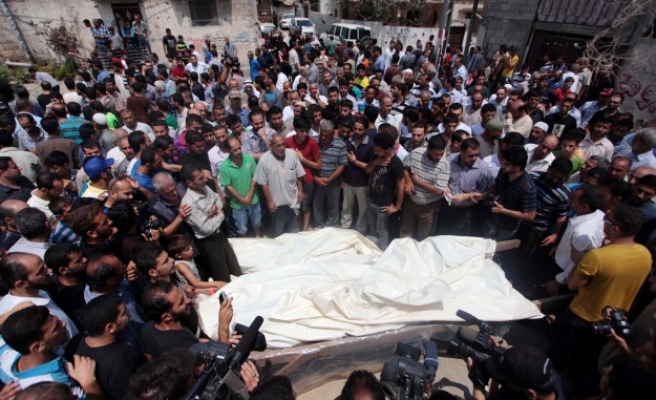 Seven Palestinians were killed in a fresh Israeli airstrike in the southern Gaza Strip on Thursday, a Health Ministry spokesman said.

Hamas named the men as Mohammed Abu Shammala, Raed al-Attar and Mohammed Barhoum and said they were killed in a bombing of a house in the southern town of Rafah.

A military spokeswoman said aircraft carried out 20 assaults in Gaza on Thursday, but gave no further details. Late on Tuesday Israel targetted Hamas's top military commander, Mohammed Deif, but failed to kill him. Deif's wife and seven-month-old son were killed in the air strike, Hamas said.

"The assassinations of the three Qassam leaders is a grave crime," Hamas spokesman Sami Abu Zuhri told Reuters. "But it will not break our people and Israel will pay the price for it."

Shin Bet said Abu Shammala was head of Hamas's southern command and described al-Attar as a brigade commander. It said both had been leading and coordinating fighting against Israel in the south of Gaza, where some of the most intense combat has occurred.

Egypt said it would continue contacts with both sides, whose delegates left Cairo after hostilities resumed. Yet there appears to be little chance in the current circumstances of putting an end to fighting and making progress on peace talks.

Israeli PM Netanyahu said fighting could go on for a long while.

"This will be a continuous campaign," he told reporters.

As well as the Hamas commanders killed, Palestinian medics reported 19 other deaths on Thursday, including three children.

Hamas has said it will keep up its fight against Israel until the Israeli-Egyptian blockade on the Gaza Strip is lifted.  The Egyptian-led peace talks had looked to be making some progress towards a relaxation of the blockade, but Israel wanted guarantees no weapons would enter the territory.

Israel has been pounding the Gaza Strip since Tuesday following the collapse of a temporary ceasefire with Palestinian factions.

Israel accuses Palestinian factions of violating the ceasefire, a claim denied by Hamas, which accuses the self-proclaimed Jewish state of derailing efforts aimed at reaching a permanent ceasefire deal.

Since hostilities began on July 7, at least 2064 Palestinians have been killed and more than 10,000 others injured in relentless Israeli attacks on the Gaza Strip, according to the Palestinian Health Ministry.

According to Israeli figures, at least 67 Israelis – 64 soldiers and three civilians – have been killed.

Since 2007, the Gaza Strip has reeled under a crippling Israeli blockade that has badly affected the local economy and played havoc with residents' livelihoods.