The loss of Iranian cash over the past months and Egyptian army activities in Sinai caused Hamas to feel both financially and physically isolated and necessitated the move towards Iran. 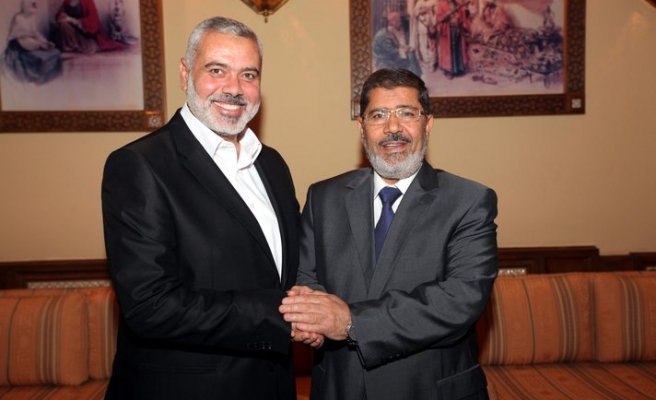 Repairing damage with Iran appears to be the first and quickest option Hamas has taken following the overthrow of Egyptian President Mohamed Morsi by the military earlier this month, according to analysts and officials from the group, which governs the Gaza Strip.

"There are meetings between us and the Iranians to handle some issues and reach understandings that put all of us in the circle of joint work," Ahmed Youssef, a former adviser to Hamas Prime Minister Ismail Haniya, told Anadolu Agency.

Over the past couple of years, Hamas has refused to take sides with Syrian President Bashar Al-Assad, its longtime patron and host, in his fight against public uprising that is still going on.

This has largely undermined relations with Iran, a major political and financial backer of Hamas.

Hamas, which took over Gaza in 2007, had reportedly depended heavily on Iranian money to run its administration and on Iranian expertise.

An academic at a Gaza University, who spoke on the condition of anonymity due to the sensitivity of the matter, said that Iran used to channel $20 million a month to Hamas in the Gaza Strip.

He told Anadolu Agency that most of the budget goes as salaries for the 50,000 public servants of Hamas.

Osama Hamdan, a politburo member and the chief of foreign relations in Hamas, told the website of the Hamas-run Al-Resalah newspaper that talks are underway to restore ties with Iran, adding that both sides have no differences concerning the Palestinian cause.

The ouster of Morsi, a leader of the Muslim Brotherhood, perceived to be the historic mother of Hamas, has dealt a virtual blow to the Palestinian group.

An ensuing incitement campaign against Hamas, which Youssef insists is unjustifiable, took a new turn last week when the Egyptian prosecution accused Morsi of conspiring with Hamas.

This coincided with Hamas' physical isolation in Gaza, with the restricted ability of its leaders and officials to travel out of the coastal enclave through Egypt.

Youssef says Hamas is no longer able to receive visitors or solidarity convoys that used to come to Gaza through Egypt.

A stepped-up crackdown by the Egyptian army on border tunnels since June, as part of a larger onslaught against insurgency in the restive Sinai Peninsula, is also affecting Hamas.

In 2010, Israel eased a long-running blockade on the Gaza Strip to alleviate an international outcry that followed its attack on a Turkish-led flotilla bound for Gaza to challenge the Israeli siege. Nine pro-Palestinian Turks were killed in the maritime raid.

With the easing of flow of goods through Israeli-controlled overland crossing points, tunnels were dedicated to bring massive amounts of items that Israel still restricts, mainly construction materials and Egyptian fuel, which is sold here at half the price of the Israeli petrol.

A recent UN report said that 80 percent of the tunnels had now come to a halt.

The loss of Iranian cash over the past months and Egyptian army activities in Sinai caused Hamas to feel both financially and physically isolated and necessitated the move towards Iran.

But some analysts predict that the ties would not return to normal between the former closest allies.

Iran and Hezbollah, its ally in Lebanon, "know that Hamas is in an impasse and it's likely to kneel down and return in their axis as a weak player," Hani Habib, a political analyst in Gaza, told AA.

Observers believe going back to Iran was the more preferable of two choices for Hamas.

The other option would have been igniting a fight with Israel and going into reconciliation with President Mahmoud Abbas' Fatah movement, which has been holding sway in the West Bank since it lost Gaza in 2007.

But Abbas does not seem ready for reconciliation, especially with the resumption of US-sponsored peace talks with Israel after nearly a three-year hiatus.

Habib, an analyst, believes Hamas can endure, depending on the tight grip it preserves on Gaza.

"Hamas has endured during (former Egyptian President) Mubarak's era and will be able to carry on even in the post-Morsi phase."

Iran is like a stunted chessmaster as it manipulates the chessboard of the Middle East to leverage terror groups like Hezbollah as proxies to fight in Syria while it seeks to offset Sunnis and rival Shi'ite groups surrounding it. With the pinch of sanctions, Iran has to manage limited currency reserves so it picks and chooses its friends carefully. With Morsi toppled, Iran now looks to Hamas.