Hamas rejected an allegation aired on Egyptian state television that it has been involved in teaching Islamists in Egypt how to plant bombs in cars and that it had given them landmines. 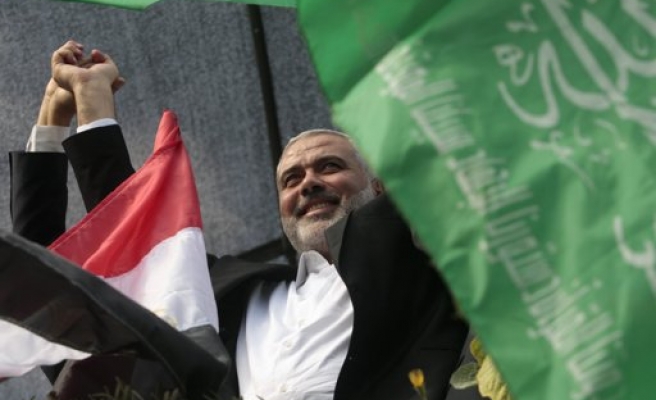 Egyptian state television on Thursday accused Palestinian Hamas of training Egyptian Islamists in how to carry out bombings, piling yet more pressure on the Muslim Brotherhood, ally of Hamas.

The allegations that Hamas has been training Egyptian militants could lead the military-backed authorities to escalate their crackdown on the Brotherhood.

"Security authorities have learned that the military wing of the Hamas movement trained several people to undertake car bombing operations and trained various others to make explosives," said a presenter on state television.

"The military wing of the Hamas movement provided various Salafi jihadists and also other religious currents with 400 landmines. The security apparatus documented this and they will be arrested."

Fawzi Barhoum, spokesman for the Hamas, said of the report: "This is completely incorrect".

It was an "attempt to demonise Hamas", he added.

The army-backed government in Egypt has tightened control of crossings from the Sinai peninsula into Gaza, which Egypt ruled from 1948 to 1967, and continued assaults on militants in Sinai.

Egypt's closure of cross-border smuggling tunnels has dealt a major blow to the Palestinian group.

Hamas has recently tried to lower tension with Egypt, ordering Muslim preachers to mute their criticism of Cairo.

His ousting was seen as a setback for Hamas, and came as the group's ties with traditional allies Iran and the Lebanese

Security forces killed hundreds of members during a raid on pro-Mursi protest camps in Cairo on Aug. 14 and then arrested top Brotherhood leaders accused of inciting violence.

There are no signs that the pressure on Islamists will ease.

Egypt extended a state of emergency for two months on Thursday as authorities expressed growing concern over militant violence. It also has an overnight curfew in place.

The government originally announced a one-month state of emergency on Aug. 14 and Thursday's announcement extended the order, which covers the whole country, to mid-November.

The Muslim Brotherhood has accused the government of rehabilitating the older order that served under autocratic president Hosni Mubarak for 30 years and catering to military officials.

An Egyptian court on Thursday acquitted all 14 defendants, including policemen, accused of killing 17 protesters during the bloodiest day of a revolt that toppled autocrat Hosni Mubarak over two years ago, judicial sources said.

The deaths in Suez City triggered violence across Egypt on what was later called "The Friday of Rage" - Jan. 28, 2011 - that fuelled an 18-day uprising against Mubarak, who had ruled Egypt for 30 years.

The case is the latest in a series in which Mubarak-era officials were either acquitted or given light sentences, raising frustrations among opponents of the government and the old regime.