In a brief statement, the Ezzeddin al-Qassam Brigades said that Mohamed Shabaan, head of its naval commandos department, had been killed in an airstrike. 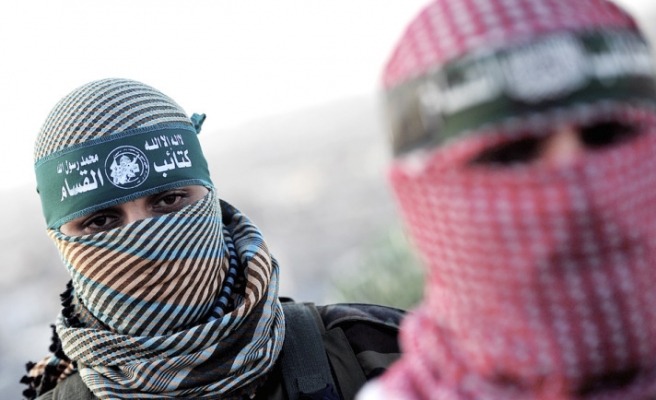 The Ezzeddin al-Qassam Brigades, the military wing of Gaza-based resistance faction Hamas, has set four conditions for Israel to meet before the Brigades would halt operations against Israel, which on Tuesday launched a major offensive against the besieged Gaza Strip.

"The enemy will not enjoy calm as long as it continues to stage criminal attacks on our people in the West Bank, Jerusalem and Gaza in breach of the [Egypt-brokered] 2012 ceasefire deal," Brigades spokesman Abu Obeida said in a recorded statement broadcast on Hamas' Al-Aqsa television channel.

Abu Obeida also said Israel should release a number of West Bank Palestinians who were recently re-arrested after having been released in a 2011 prisoner exchange deal.

He also said Israel should "stop sabotaging" a recent reconciliation deal between Hamas and the rival Fatah movement in the West Bank, which saw the unveiling of a Ramallah-based unity government early last month.

He added that Israel must also "stop interfering with the work of the new government."

"The Brigades have targeted a number of sites under enemy control with dozens of rockets as a response and a warning to [Israel's] stupid decision to launch a fresh offensive on Gaza, which will come at a heavy price," Abu Obeida said.

He went on to say the Brigades would expand their operations in Israel if the latter continued to "target civilian homes" in the Gaza Strip.

The Al-Qassam Brigades said earlier Tuesday that it had blown up a tunnel under the Karam Abu Salem military site on the southern border of the Gaza Strip.

The statement came hours after the Brigades said its fighters had managed to infiltrate the Zakim military base in southern Israel, inflicting heavy losses on Israeli troops.

The Israeli Army, for its part, said that four Palestinians had been killed on the army base in a failed infiltration attempt.

A senior commander of the Ezzeddin al-Qassam Brigades, the military wing of Palestinian resistance faction Hamas, was among three people killed in an Israeli airstrike that targeted a car in central Gaza City on Tuesday, the brigades has confirmed.

In a brief statement, the Ezzeddin al-Qassam Brigades said that Mohamed Shabaan, head of its naval commandos department, had been killed in the strike.

The Israeli Army, for its part, said it had managed to kill Shabaan, head of the brigades' commando unit.

Israel considers both Gaza-based Hamas and its armed wing to be "terrorist" groups.

Gaza Health Ministry spokesman Ashraf al-Qodra told Anadolu Agency that the airstrike had killed three people, whose bodies had been extracted from the blown up car in pieces.

Violence raged in the Palestinian territories on Tuesday after Israel launched a major military offensive – dubbed "Operation Protective Edge" – with the stated aim of staunching rocket fire from Gaza.

At least 17 Palestinians were killed and scores injured in Israeli attacks across the Gaza Strip on Tuesday, while Palestinian resistance groups continued to fire rockets into Israel in response to ongoing Israeli airstrikes.

The latest escalations come amid heightened tension over the killing of three teenage Jewish settlers in the West Bank last month and the subsequent murder of a 16-year-old Palestinian boy by Jewish extremists.

In the run-up to Tuesday's Israeli offensive, over a dozen Palestinians were killed and at least 600 arrested by Israeli forces since the mid-June disappearance of three Jewish settlers.

The 2012 ceasefire deal came after eight days of relentless Israeli airstrikes on the Gaza Strip that left dozens of Palestinian dead.

The ceasefire – brokered by the administration of Egypt's then-president, Mohamed Morsi – called on Israel to stop airstrikes on Gaza in exchange for a halt to Palestinian resistance operations against Israel.